9 Whitewater River Rafting Trips in New England and the Northeast 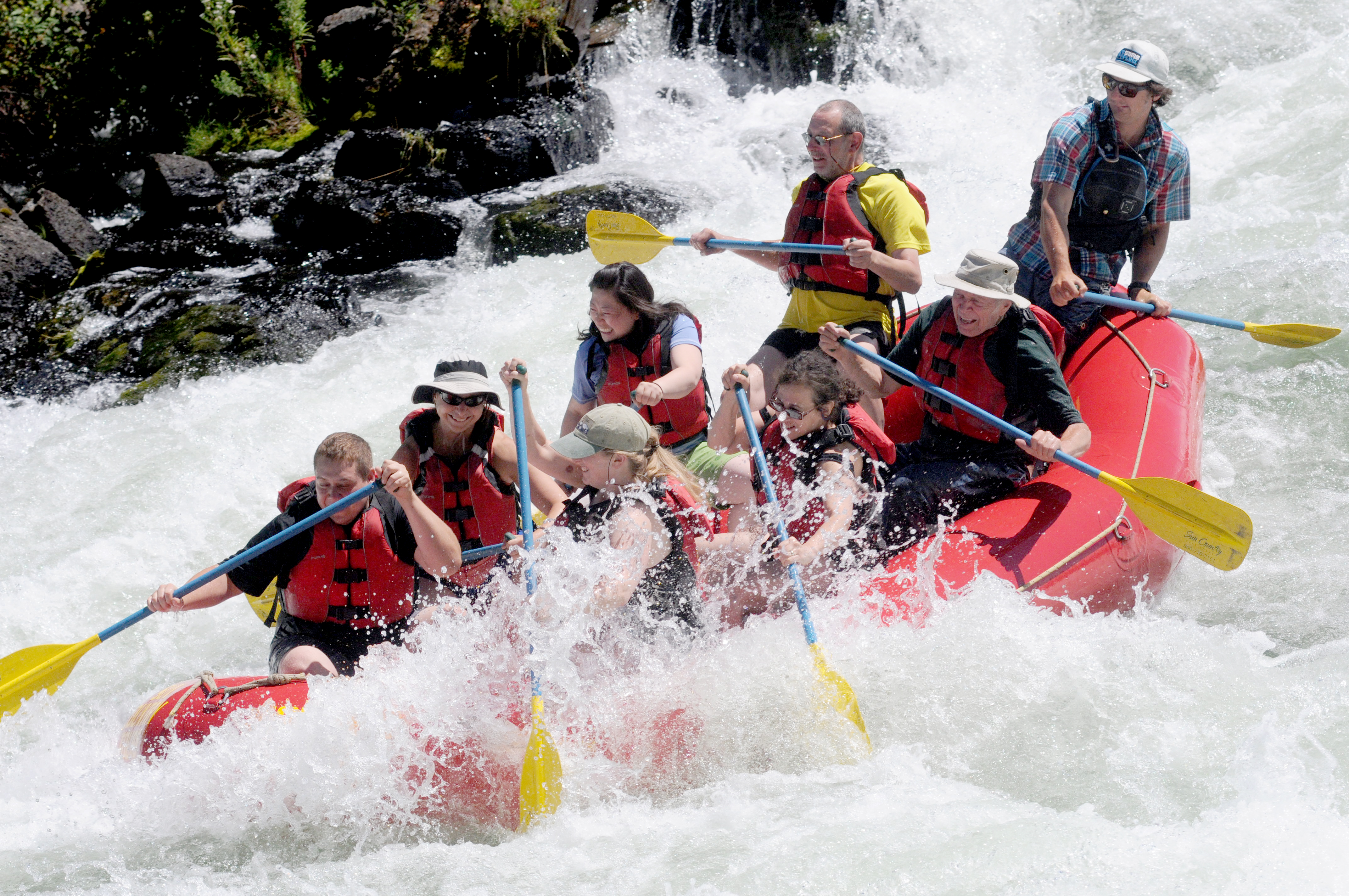 Blazing temperatures and no school make weekend trips to cold water absolutely necessary. For a break from the crowded neighborhood pool, pack up the family and head to these eight fast-flowing freshwater destinations for the thrill of a whitewater rafting adventure—all in rented gear and under the supervision of an expert guide. Whether you’re a first-time wave rider or a seasoned vet, these locations provide a range of challenges and scenery. Every seat is in the splash zone, so strap on a helmet and a PFD, and get ready to paddle.

1. PENOBSCOT RIVER | Baxter State Park, Maine
Experience the second-largest river system in New England and Maine’s highest mountain, all in one: The Penobscot passes right by the foot of Katahdin in a section of class III-V rapids for true thrill seekers. Northern Outdoors Outfitters, headquartered in The Forks, operates a 15-mile run from a satellite site just east of Baxter State Park, Memorial Day weekend through Labor Day weekend. Trips run according to the schedule of Ripogenus Dam, which releases 2,000 to 2,300 cubic feet per second (cfs) every day except Wednesday from May to mid-September. Get ready for the class-V Exterminator and the largest drop on the whole river, also known as Lose Your Lunch Falls.

2. ANDROSCOGGIN RIVER | Errol, N.H.
This raftable, 36-mile, north-to-south stretch of New Hampshire water is actually part of the third-longest river in Maine: The Andro takes a 90-degree turn at the top of the White Mountain National Forest, in Gorham, N.H., and continues southeast into Brunswick, Maine, where it intersects with the Kennebec River. Raft NH, ELC Outdoors, and North Woods Rafting all operate guided trips in this remote part of the Granite State, and each offers the option of going with a guide or taking lessons before going it alone. The mild whitewater of the northernmost Errol rapid provides a great training spot for novices. From there, class II and III whitewater runs below Pontook Dam, near Milan and through Berlin. The dam releases seven days a week, from Memorial Day weekend through the end of September, running as low as 500 cfs during the week to allow for a flow of 2,200 cfs on weekends.

3. HUDSON RIVER | North River, N.Y.
Buried in the Adirondacks 30 miles northwest of Lake George, the towns of Indian Lake and North River are four-season destinations with a plethora of rafting options. Adirondack River Outfitters, Adirondack Adventures, and Whitewater Challengers all run whitewater rafting on the Hudson River, which dissects both towns. Controlled by the Abanakee Dam, the Indian River—which acts as major tributary to the Hudson—pushes around 6,500 cfs on Tuesdays, Thursdays, Saturdays, and Sundays. The main event of this stretch is the Hudson River Gorge, a 12-mile ride of naturally rocky, class II-IV whitewater located in the vast Hudson Gorge Wilderness Area.

4. WEST RIVER | Jamaica, Vt.
A hidden gem in southern Vermont, the West River outlines the eastern portion (go figure) of Green Mountain National Forest, with close proximity to Stratton Mountain and Mount Snow Ski Resorts. Crab Apple Whitewater, Zoar Outdoors, and Berkshire Whitewater all offer guiding services on an 8-mile stretch of class II-III water in Jamaica State Park. One popular put-in is Ball Mountain Dam, whose intermittent, 1,500-cfs recreational releases on the first weekend in May and the third weekend in September create intermediate-level rapids. Steel yourself for the class-III Initiation, followed by Boof Rock and The Dumplings—so named for the large boulders creating the natural whitewater. Local camping fills up quickly on release weekends; expect the river to be well-trafficked by whitewater regulars.

5. DEERFIELD RIVER | Florida, Mass.
The longest undammed section of the Deerfield River runs from Fife Brook Dam, on the north, to Number 4 Dam, 17 miles south, with plenty of uninhibited paddling in between. Fife Brook releases a 700-cfs flow Wednesdays to Sundays, from the second week in April to the second week in October. The stretch from there to Zoar Gap features two bridges and multiple introductory- to advanced-level rapids, making those first 5 miles a favorite of many rafters. Freight Train, a class-II rapid, shoots water around 1000 cfs, while Pinball, also a class II, gets its name for its large boulders and small passageways. Multiple outfitters, including Crab Apple Whitewater, Zoar Outdoors, and Berkshire Whitewater, guide outings that vary in price, distance, and duration. Most trips have a minimum age of 7 or 8, and all include riverside snacks or lunch, making this a good choice for families with not-too-little ones.

6. UPPER DELAWARE RIVER | Narrowsburg, N.Y.
The National Wild and Scenic Rivers System, which celebrates its 50th anniversary in 2018, bestowed two types of designations on the Upper Delaware River back in 1978: 23.1 miles as scenic, for its beauty and limited road accessibility, and 50.3 miles for its easier access and corresponding minimal development. Lander’s River Trips guides a variety of rafting adventures on both and operates three riverside campgrounds to boot. The trips are intended for all ability levels, with a minimum age of 5, and run from multiple put-in and take-out points between Callicoon, N.Y., and Matamoras, Pa. The rapids between the two towns are all natural, meaning they result from rocky underwater turbulence rather than dam releases. Skinner’s Falls—which isn’t actually a waterfall but a class II rapid—is the most popular whitewater feature, so expect to share it on hot summer weekends.

7. LEHIGH RIVER | Jim Thorpe, Pa.
One of the major tributaries to the Delaware, the Lehigh River boasts a high concentration of whitewater guides and outfitters, including Whitewater Challengers, Jim Thorpe River Adventures, and Pocono Whitewater. A 15-mile stretch—largely class I to III-plus—of fun begins at Francis E. Walter Dam. From there, the river cuts through the western portion of Hickory Run State Park and Lehigh Gorge State Park before slowing down around the town of Jim Thorpe. The dam schedule is set by the U.S. Army Corps of Engineers, with releases on scattered weekends from May to September. Given the many options, finding a guide service that works for your group size, age range, and ability level should be a snap.

8. LOWER DELAWARE RIVER | Easton, Pa.
The lower portion of the Delaware received its protected status in 2000, covering 25.4 scenic and 41.9 recreational miles between Easton, Pa., and Trenton, N.J. Rapids are scarce in this nontidal section, and outfitters lead trips on the calmest waters only, but the class II-III whitewater around rocky Scudder’s Falls and Lambertville Wing Dam is fun for self-guided rafters. (A wing dam is so named for its two halves that cut into the river from each shoreline without meeting in the middle, allowing for passage in between.) If you’re not quite ready to go guideless, Buck’s County River Country and Delaware River Tubing offer relaxed quiet-water rafting for all ages and group sizes. Lunch is available, and all equipment is included.

9. POTOMAC AND SHENANDOAH RIVERS | Knoxville, Md.
These two iconic bodies of water weave through the junction of Maryland, Virginia, and West Virginia, with their confluence acting as the focal point of Harpers Ferry National Historical Park. Well-preserved truss bridges and a riverside stretch of Appalachian Trail make this location popular with land-based recreators, but never mind the shore goings-on. The class I-III rapids will hold your attention as you crash over multiple state lines. Exciting features include the Spike Dam Rapids, a whitewater series resulting from a broken-down dam, as well as the diagonal waves of Roller Coaster and the class II Mad Dog. Enjoy the ride as guides from River and Trail Outfitters or Harpers Ferry Adventure Center steer you along a 6- to 8-mile historical route connecting the Potomac to the Shenandoah.

Katie Hill is a 2018 graduate of Boston's Emerson College, where she majored in journalism and minored in environmental studies. She interned for AMC Outdoors in spring 2018 and will spend the summer working for a guest ranch in central Wyoming.