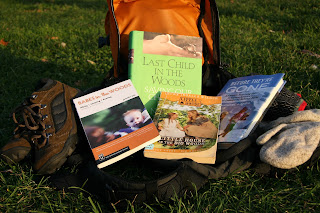 In the current din of parenting advice—from tiger moms and drinking mommies, hipster daddies and tool-belt fathers—parents looking for advice on raising outdoor children may not realize how much their corner of the parenting bookshelf has grown over the past decade. Books for outdoor parents now go beyond guidebooks to include manifestos; new research in psychology, neurology, and health; how-to guides for different stages in family life; and inspirational family narratives.

The 10 books listed here illustrate that expanding range. Some are classics from an earlier era; some are newly published; some will be familiar to regular readers of AMC Outdoors and the “Great Kids, Great Outdoors” blog. Together they add to our increasing understanding of the value of bringing up children who are self-reliant, comfortable in and knowledgeable about the natural world, and capable of becoming good stewards of that world.

Classics
The Little House books—fictional portrayals of her family’s life on the American frontier by Laura Ingalls Wilder—have given generations of young people their first intimate, visceral sense of the natural world. “They inspired me and many outdoor-oriented women I know,” said Appalachia editor Christine Woodside this past fall. “The themes alternate between courageously dealing with nature’s furies, respecting the patterns of wild animals even as they fear/hate them, and journeying on to unseen locales.” As she was telling me this, Woodside was experiencing nature’s furies herself in the aftermath of Hurricane Sandy, lighting candles “just as Ma Ingalls did during the long winter.” The first book in the series, Little House in the Big Woods (1932), is among the many outdoor stories that parents can share with their children, and which can inspire them both.

Cultural Critiques and New Paradigms
In recent years, several critically acclaimed books have drawn on a growing body of research in how spending time outside—or not—affects the health and well-being of children and communities, as well as expressing a growing sense of unease over changing family lives, technology, and the environment.

Last Child in the Woods, the best known of these books, starts from the premise that “our children are the first generation to be raised without meaningful contact with the natural world.” Author Richard Louv makes a persuasive case for why that contact matters; the updated 2008 edition includes a “Field Guide,” offering numerous ways for families and communities to build stronger connections to nature.

Five years ago, Lenore Skenazy wrote a newspaper column about letting her 9-year-old son take the New York City subway home from a department store, alone. She never expected that other parents would accuse her of child abuse or that she’d be vilified on national television as “the worst mom in the world.” In her subsequent book, Free-Range Kids, Skenazy uses facts, statistics, and humor to debunk such “worst-first” thinking—“taking the worst possible outcome and acting as if that’s likely to happen”—while highlighting the benefits of letting children roam. “You can tell the health of a community,” she argues, “by how many children are outside.”

Psychologist Wendy Mogel wrote The Blessings of a Skinned Knee after noticing that many of the affluent and well-educated parents she was seeing in her counseling practice “were looking in the wrong places to remedy their families’ distress.” Mogel uses Jewish teachings to help parents create opportunities for their children to develop self-reliance, independence, gratitude, and a sense of responsibility for the greater world. “In communities of abundance,” Mogel writes, “parents often try to fill their children’s lives with ‘stuff’—toys, tutors, therapists…. But ask any adult about his or her fondest childhood memories, and you’ll always hear the same things: time spent with family, especially in nature or having an adventure, the smell and taste of favorite foods, the personality and warmth of a beloved relative.”

How-To
There have long been guides for hiking with children, including several published by AMC. Recent books have upped the ante, going beyond hiking to other sports and guiding parents of infants and toddlers.

In Outdoor Parents, Outdoor Kids, Eugene Buchanan, a former editor of Paddling magazine, pitches his message to fellow adrenaline junkies, reassuring them that they can continue to ski the deeps, paddle whitewater, and ride single-track even after they have children. The book offers tips on gear and games to play with children in nine chapters, covering one sport per chapter, plus Buchanan’s adventures with his own children.

Jennifer Aist wrote Babes in the Woods: Hiking, Camping, and Boating with Babies and Toddlers to encourage parents to take even very young children on outdoor adventures. The easy-to-use guide covers clothing, child carriers and other gear. It also lists age-appropriate activities on hikes and in camp, provides clear recommendations for safety, and gives tips for perennial family-trip concerns, such as going to the bathroom and sleeping in the outdoors. Aist is the mother of four children and the director of parent education at Providence Children’s Hospital in Anchorage, Alaska.

Family Narratives
The most intimate voices on the outdoor parent bookshelf are those that tell the particular stories of individual families. The best of them make us think differently about our own family lives.

Up, Trish Ellis Herr’s story of hiking New Hampshire’s 4,000-foot peaks with her young daughter is a personal narrative of a mother learning to follow and guide her children’s passions that can also be used as a trail-tested resource for hiking families.

In Wild Play, environmental educator David Sobel reflects on ideas he’s devoted his career to—principles of children’s development in connection with nature, and strategies for developing those connections—in the light of his own experiences as a father. Wild Play describes childhood development using natural metaphors—meadows, forests, rocky ridges—and provides a strong example for the value of story-telling in building a lifelong connection between children and the natural world.

Two-time National Book Award finalist Melissa Fay Greene has written about civil rights, AIDS, and Africa. No Biking in the House Without a Helmet is the story of her family—four children who came home from the hospital, and five who came home from the airport—a “Cheaper by the Dozen for a new planet.” Greene’s humorous, heart-breaking family story shows parents and kids taking risks of the best sort—both inside the house, as the title says, and outside. (Try the chapter on sandlot baseball or the one called “Squirrels We Have Known, Also Insects.”)

Michael Lanza, his wife, and their two children spent a year traveling to 11 of America’s national parks. Before They’re Gone weaves the story of their adventure around a meticulously researched and sometimes painful-to-read chronicle of how climate change will alter, in some cases beyond recognition, these beloved natural places. The book is a compelling and honest accounting of a parent’s hope that we can change the arc of that story, for our children and our children’s children. “The great challenge about dealing with climate change,” Lanza says, “is that it feels hopeless. But to be hopeless is to give up on a future.” In Before They’re Gone, Lanza embraces optimism, “for the sake of my children.”

Learn More
AMC has recently launched a guidebook series, Outdoors with Kids, specifically for outdoor families. Outdoors with Kids guides for Boston and New York City were published earlier this year; a guide for Philadelphia is due next spring. You can join the accompanying online community at kids.outdoors.org.