350: A number our children should know 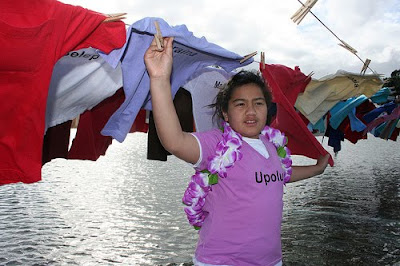 Does the number 350 mean anything to you? It didn’t to me until earlier this week. Matt Dahlhausen, the Dartmouth student who directed the Dartmouth Outing Club’s effort to hike the Appalachian Trail in a day (“AT in a Day“), signed his emails with an oversize “350” and a link to 350.org. Spam? Money scheme? Tasteless joke? My curiosity overrode my anxiety: I clicked on the link — and I found a world of people trying to raise awareness of climate change.

350.org was co-founded by writer and environmentalist Bill McKibben. His book, The End of Nature, published in 1988, is considered the first general-interest book to sound the alarm about global warming. McKibben and an international team of organizers at 350.org are trying to make Saturday, October 24, the most widespread day of action on global warming in history.

Here’s what their mission statement says about the meaning of 350:

“Our focus is on the number 350—as in parts per million, the level scientists have identified as the safe upper limit for CO2 in our atmosphere. But 350 is more than a number—it’s a symbol of where we need to head as a planet.”

The measurable CO2 in the atmosphere is currently at 387 parts per million and rising. World leaders meet in Copenhagen, Denmark, in December to craft a new global treaty on cutting emissions. Yet many environmentalists, including those involved with 350.org, are concerned that the treaty currently on the table doesn’t address the severity of the climate-change problem. Raising public awareness of the importance of the 350 ppm CO2 goal may put pressure on those leaders to take stronger action.

I’ve taken some time finding 350-related events scheduled around New England. People in Pomfret, Vermont, are collecting 350 cans for food banks to highlight the effect of global warming on the planet’s most vulnerable citizens. Students from Lebanon Junior High School, not far from where we live in New Hampshire, are participating in a Saturday afternoon of education on climate change and creating a large “350” picture, which they’ll add to hundreds of other photos being collected on the website.

Events in coastal communities are pointing out the effects of rising sea levels and increased storm action. On Nantucket Island in Massachusetts, a “high tide line” is being marked for 50 years from now, if CO2 levels continue rising. In Old Lyme, Connecticut, a revised version of the Beatles’ song “Get Back” (“Get back to 350ppm”) will accompany a demonstration of the effects of inland flooding. In Boston, a full-day “under-water” festival at Christopher Columbus Park includes a sandbagging race and a “350” photo at 3:50 p.m.

Churches everywhere are set to ring their bells 350 times on Saturday and Sunday, among them “Paul Revere’s bell” in King’s Chapel in Boston. When I started talking about this event to Jim, he said, “Didn’t you read the notice I sent you?” Turns out children will be ringing the bells in our little church in South Danbury, New Hampshire. The site also lists many events at schools and highlights the passion that many young adults bring to the issue of climate change.

It is already October 24 in many parts of the world, and pictures are flooding the site. Here’s a write-up from New Zealand: 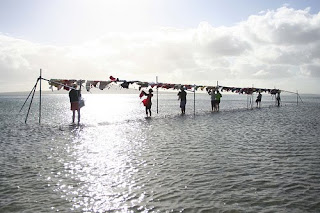 “Sending a message that New Zealand’s Pacific Island neighbors are being “hung out to dry” by climate change, […] Pacific Islanders waded out to the lines and hung 350 T-shirts, each printed with the name of a different island, on a series of giant washing lines to highlight the insufficient action being taken to combat climate change. Jane Filemu, a 9-year-old Samoan girl, walked through knee-deep water to hang the final T-shirt—a poignant reminder of just how high the stakes are, and an incredible sign of how intergenerational this movement has become.”

I’ve been surprisingly moved by these stories and images. I think of my children and their future, and I think of the love I hope they will have for this planet. It seems to me an appropriate subject for this blog. With all of the complex science surrounding this issue, 350 is a number children can understand.

Learn more
Browse the website at 350.org or view the nearly 5,000 actions worldwide on their interactive map.

Photos of Jane Filemu and Pacific Islanders courtesy of 350.org.