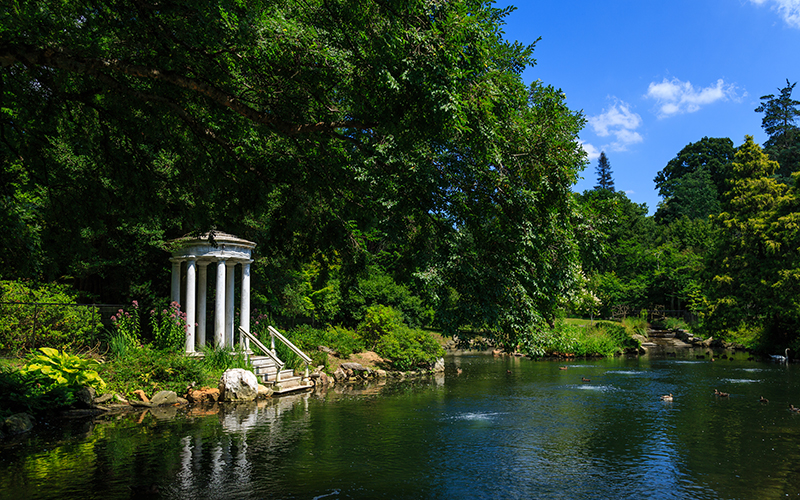 Paul Dajewski via Creative Commons by FlickrNear Philadelphia’s northern city limits, the Morris Arboretum is a sculpture park that is home to more than 2,600 unique plant species.

A tremendous amount of variety exists in the world of outdoor sculpture parks. New York’s world-famous Storm King Art Center, for example, draws curious art lovers to its facility, where larger-than-life works loom across a property hundreds of acres in size. Meanwhile, town and city parks like the Clifton Municipal Arts Center in Clifton, N.J., may display just handful of pieces from local artists granted the opportunity to show off their practiced skill.

Since early spring 2020, many museums around the country have been closed in an effort to half COVID-19’s spread in enclosed, crowded spaces. But as some states begin safely reopening businesses, outdoor museums and sculpture parks provide a safe opportunity to enjoy art while getting outside for some exercise and sun.

A half-hour drive from either Portsmouth or Manchester, N.H., Bedrock Gardens welcomes visitors to what it calls “an oasis of art, horticulture, and inspiration.” The 37-acre botanical and sculpture garden has a lineup of aptly named attractions, including the Dark Woods, a pine tree grove inhabited by wooden and rusty metallic sculptures, Quetzalcoatl, after the ancient Central American serpent deity, to Darth, who hails from a galaxy far, far away. There’s also Shrubaria, the garden’s new oasis of simple garden shrubs, which are lined by bright rhododendrons and tall oak trees. A suggested path can be found on Bedrock’s website, which will take visitors through all 23 of the garden’s attractions. Visitors should plan their trip soon, as the park closes for the winter at the end of October.

Hours: Tuesday through Friday, as well as the first and third weekend of every month, from 10 a.m. to 4 p.m.

Admission: A suggested donation of $10 for adults 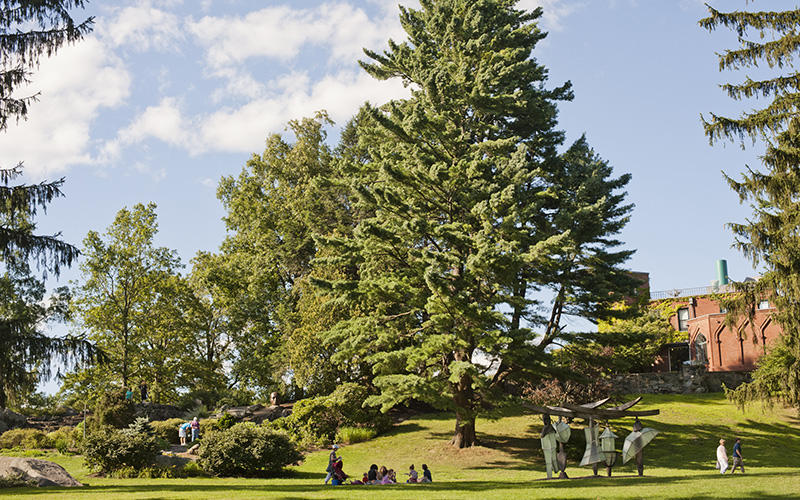 MASSACHUSETTS OFFICE OF TRAVEL AND TOURISMSpend an afternoon wandering the grounds of DeCordova Sculpture Park in Lincoln, Mass.

The deCordova Sculpture Park and Museum’s expansive green lawns are populated by a diverse array of sculptures, from Aaron Curry’s brightly painted and vaguely humanoid trio, Blubat, Ugly Mess, and Homewrecker, to DeWitt Godfrey’s 150-foot long cascade of steel cylinders, seemingly caught in mid-tumble down a hill. A map on the park’s website lays out three possible routes through the grounds—one for the highlights, one for families, and one that’s wheelchair accessible. Currently, the museum is under Massachusetts capacity limits, which means that visitors will need to arrive with a pre-purchased ticket for a specific arrival time.

Don’t Miss: The deCordova Ball and Requiem for the 20th Century, which was built using a Depression-era Chrysler. 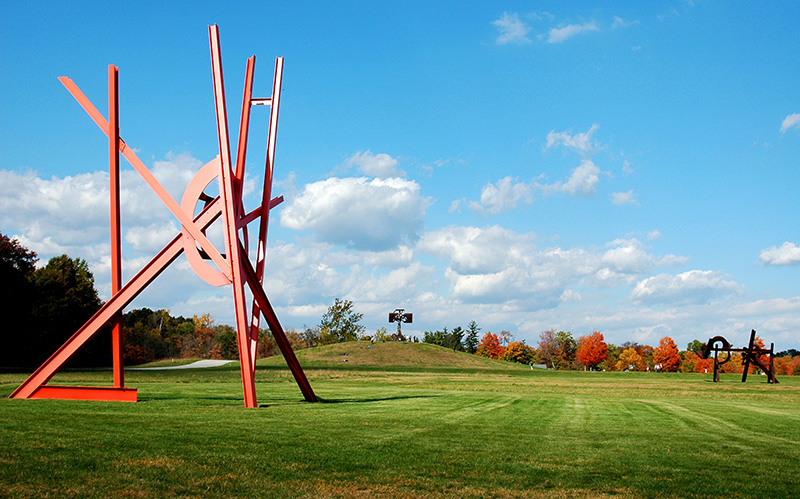 A highlight of any trip to New York’s Hudson Valley, Storm King Art Center has an expansive collection of modern sculpture, many of which are too large for the average museum. Scattered over 500 acres, Storm King’s inventory includes large-scale pieces from well-known artists like Alexander Calder, including The Arch, a 50-foot tall curved structure made of black-painted steel. Be sure to also catch the easily-hidden pieces of environmental sculpture artist Andy Goldsworthy, famous for incorporating his art, made of natural elements, into its earthly surroundings, like Storm King Wall, a low stone wall that quietly winds its way through the trees before disappearing into a pond. A map of the grounds helps determine your route, but plan to spend most of your day wandering through open fields and woodlands with exceptional views of the surrounding Hudson Valley hills.

Admission: $10 per person, with discounts for larger groups and are available online and must be purchased in advance

Alternate route: For art lovers in New York City looking to get outside but still wary of public transit, head to Socrates Sculpture Park on the banks of the East River in Queens. The park is open with free admission, 365 days a year, from 9 a.m. until sundown, and features rotating exhibits every six to nine months.

For more than 70 years, Clifton, N.J., just north of Newark, housed the ‘Ellis Island’ for animals, an Agriculture Department station where imported animals were quarantined before being admitted into the United States. But in 1975, when the facility was relocated, that land was sold to the town, where today it is home to a 26-acre sculpture park with more than 30 works, ranging from a replica of the 17th century Bust of Hercules, to Resettlement, a stone sculpture depicting three Jewish refugees fleeing Germany. Located across the Hudson River from Manhattan, the Arts Center is a community space at its core. “It’s a very active place,” says Michael Bertelli, the parks sculpture liaison. “People are passing by every day. It’s kind of unique in that way.” Bertelli himself has sculptures featured at the Arts Center, including The Snubbies, a trio of short, stubby men deep in thought. Visitors aren’t required to order tickets in advance but are expected to practice social distancing and wear a mask.

Don’t miss: The Snubbies, Resettlement, One World United For Peace

Near Philadelphia’s northern city limits, the Morris Arboretum is home to more than 2,600 different plant species and 13,000 plants overall. It houses everything from a canopy walk amongst the trees, to a Japanese water garden, to a wetlands area. And yes, also a sculpture garden. Maps for 10 different self-guided walking tours are available on the Arboretum’s website, each one hitting upon a different theme, from the “Garden Highlights” to the “Great Trees.” The Arboretum, owned by the University of Pennsylvania, is easily accessible via public transit. Visitors need to purchase their tickets in advance of heading out. 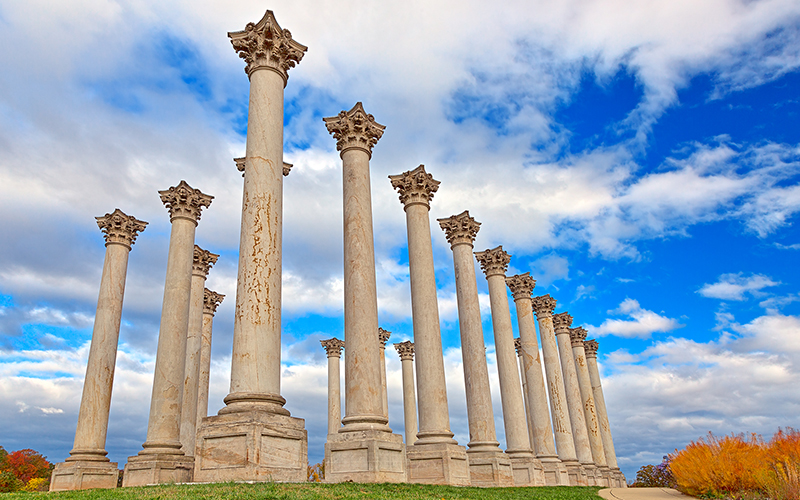 NICOLAS RAYMOND/ CREATIVE COMMONS ON FLICKRDon’t miss the National Capitol Columns when you visit the National Arboretum in Washington D.C.

While many of Washington, D.C.’s museums have remained closed since the spring, the National Arboretum is not only open—it has extended its hours. Wander alongside fern gardens and a grove of state trees over the 446 acre property, or visit the National Capitol Columns, a set of 22 towering Greek columns located toward the grounds’ core. The Arboretum is also home to a pair of bald eagles named Mr. President and The First Lady, plus the National Bonsai and Penjing Museum, which although currently closed due to the pandemic, is worth a visit when it reopens. Visitors to the Arboretum can drive or take public transit.

Don’t miss: The National Capitol Columns and the National Grove of State Trees