A Children’s Crusade on Climate Change 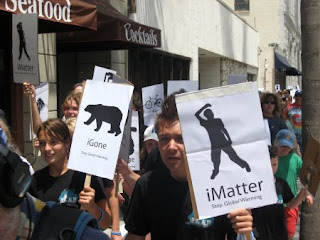 “I am 16 years old and live in Harrisburg, Virginia,” the legal document starts. Grant Serrels, the young Virginian, goes on to describe what it’s like to be a 21st-century kid growing up on the Shenandoah River:

When we moved to Timberville, Virginia almost six years ago, our family lived in a house located on the North Fork of the Shenandoah River. My excitement of being able to play, fish, and swim in the river was quickly thwarted. As a new resident, my family and I soon learned the river had become polluted as a result of lax standards of factory discharge into the river. The river water had also increased in water temperature due to climate change and the bottom of the river was covered in algae. The Shenandoah River had become unsafe for swimming. Also, ‘fish kill’ became a common vocabulary word for the die off of trout, bass, and sunfish (sometimes in large numbers). My dad is a fisherman, and we would go fishing together a lot. We caught several fish in the Shenandoah River that had lesions. The reason for these lesions and the fish kill is related to the increased temperature of the river waters over the past decade.

Serrels is one member of an unusual group of plaintiffs suing the federal government: unusual, because they’re between the ages of 10 and 17; unusual, because they are suing to ask government agencies to more effectively and more quickly address climate change; and unusual, because their case relies on the Public Trust Doctrine, which requires the government to protect and maintain certain shared resources for the health and survival of everyone, including children and future generations — that is to say, Serrels and his fellow plaintiffs. According to Our Children’s Trust, the nonprofit organization that assembled and filed the case, it is the first time that the Public Trust Doctrine has been applied to the atmosphere and on behalf of the country’s youth.

The young people’s quarrel with the government is that it’s dragging its feet on addressing climate change. Their voices combine youthful sincerity and naiveté with a scientific understanding of climate change, its troubling trajectory, and its political gridlock, which makes this adult both sad and ashamed. The shame comes when I read Madeleine MacGillivray Wallace’s plea for adults to address global warming before it reaches a scientific “tipping point.” “I’m not in a position to take action of the scale needed to fight climate change,” the 15-year-old New York City native writes. “I have to instead depend on my government to live up to its responsibility of protecting the public commons and making sure I, my generation, and future generations have a livable planet.”

Serrels ends his declaration with a similar combination of concern and determination: “I felt very depressed but at the same time motivated to do something about protecting the earth before it’s made uninhabitable for my and future generations.”

These young people are far more politically engaged than the average teenager (or the average adult), but their anxiety about the future is shared by many of the nation’s youth. In a 2011 survey of teen attitudes about nature by The Nature Conservancy, nearly three-quarters of the respondents agreed with the statement, “Previous generations have damaged our environment and left it to our generation to fix it.” Less than one-third thought the government was doing a good job of addressing such major problems.

The young people involved in the climate-change lawsuit have already won a first victory. A hearing was originally scheduled earlier this month in San Francisco, but when the case began to receive national publicity, the hearing was moved to Washington, D.C., at a date yet to be determined. Several of the plaintiffs hand-delivered letters to members of Congress before the holiday break urging them to take action.

Learn more
– Read a letter by Alec Loorz, 16, founder of youth movement iMatter and one of the climate-change plaintiffs.
– Watch videos made by the young plaintiffs in the lawsuit brought by Our Children’s Trust.
– Get updates on the climate-change lawsuit.
– Learn about The Nature Conservancy survey.