A Great Blue Heron in Our Urban Wild 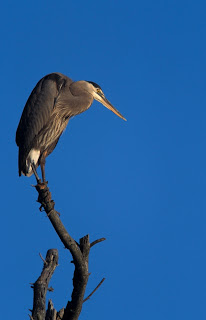 “Blue herons are really gray,” my 3-year-old daughter announced the other day.

How did she know this? She had seen one while walking near her day care. “Maybe they turn blue when they get older,” she mused aloud, “or when they die.”

Her day care is no rural facility. Street-cleaning trucks, fire engines, and other city sights are often part of the experience. But it is close to the Alewife Brook Reservation, a 120-acre urban wild near North Cambridge, Arlington, and West Somerville, just west of Boston. And a great blue heron lives there.

In fact, the heron recently flew right over my head not 100 feet from the Alewife subway station, which is near the reservation. At least I imagine it was the same bird. The slow flap of its enormous wings caused me and others on the Minuteman bike path to stop and gape upward, transported from the world of concrete for a moment.

After my daughter spotted the bird with her teachers earlier this month, I decided to go looking for it with her one weekend—and there it was, right where she had found it before. As we peered down from a wooden boardwalk into Alewife Brook, the heron stared at us from an island of debris. It looked about 4 feet tall.

“Do herons eat people?” asked my daughter, who stands a good 12 inches shorter. I reassured her that they do not (they eat fish, insects, and other small critters), but the heron let out a big croak and started to fly low over the brook. “Let’s go,” my daughter said.

Alewife Brook Reservation is far from a pristine nature experience. Just yards from the heron, we saw a shopping cart and an orange traffic cone in the water. Metal pipes from a former chain link fence are embedded in the trunks of some waterside trees.

Still, I am grateful that the wetlands are protected, offering shelter to local and migratory birds, and that the Department of Conservation and Recreation maintains paths through the area to give city dwellers a taste of the natural world. Once we had put some distance between her and the heron, my daughter remarked, “That was different. Today it made a sound and it flew.” She seemed ready to go back and investigate some more another day, and a short walk will let her do it.

Hear a great blue heron and learn more about the species from the Cornell Lab of Ornithology.

Read about birds and birding in these past posts:
Raptor Fall Migration: What to Look for, Where, and When

A Birds’-Eye View of Spring

Photo by Jerry and Marcy Monkman. The great blue heron in the image is on conservation land near Great Bay in Durham, New Hampshire.