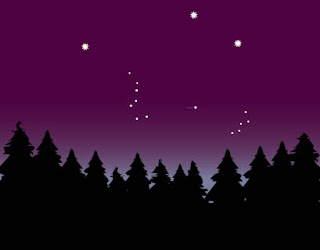 Before the school year ended, Virgil’s third-grade class visited the Montshire Museum in Norwich, Vermont. For their final science unit of the year, they were studying astronomy, and their teacher had some surprises for them. I went along as a chaperone.

We started our visit inside an inflatable planetarium called Star Lab, crawling into the room-sized bubble through a short tunnel and sitting in a large circle along its thin walls. Inside, once our eyes adjusted to the dark, Montshire educator Mike Fenzel turned on the night sky.

Obviously, he didn’t turn on the real night sky, but the scaled-down moon, stars, and planets looked real enough, and with Fenzel at the controls they followed their actual paths across the smaller sky. The class marveled at his “30-second night,” in which the deepening of twilight, the moon rising in the east and setting in the west, and the coming dawn all passed by in less than a minute. But the kids erupted with glee when Fenzel ran time in our small universe backward, making the moon travel from west to east.

Our journey through the night sky the second time around went by more slowly and touched on kid-friendly highlights. “I always start with the Big Dipper,” Fenzel told me later. “We live in an area where we can see the Big Dipper every night of the year for the entire night,” as long as it isn’t too cloudy. Right now the Big Dipper — also known by its Latin name, Ursa Major, or the Great Bear — starts high in the sky and slowly swings down toward the horizon by daybreak.

Fenzel explained that, in spite of what we might expect, the hottest stars may actually appear blue in the night sky. Slightly cooler stars will show up as yellow or white. The coolest stars come in the hottest colors, red and orange. 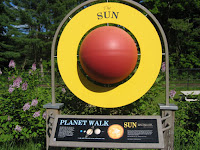 After an hour, our night in the Star Lab was over, and the class emerged into the bright light of day. Our next astronomical stop was the museum’s Planet Walk, which fits our solar system into a 3-mile hike. We started at a big orange sphere three feet in diameter — the sun. The real sun was high overhead, throwing off the first heat of the season. A path led toward scale models of the 9 planets in our solar system.

We reached the first planet, Mercury, in less than 30 strides. It actually lies 58 million kilometers from the sun. The scale model of Mercury was about the size of a ball bearing — tiny compared to the big orange sphere we’d just left. Thirty more steps brought us to Venus, the brightest object in our sky except for the sun and the moon, and about the size of a pea in this parallel universe, not much larger than Mercury. By the time we reached Mars, we hadn’t walked a tenth of a mile, not even the full length of the museum parking lot.

In their astronomy unit, the third graders had learned that the word “planet” comes from a Greek word for “wanderer.” To find the rest of the planets, we would need to wander ourselves, along a trail that climbed out of the Connecticut River Valley.

The description on the Mars model explained that to reach the fifth planet, Jupiter, we would need to walk three times as far as we’d already come. Jupiter is the biggest planet, more than two times bigger than all the other planets combined; here, it was the size of a basketball. Fenzel had told us that as the summer progresses, we’ll be able to see Jupiter in the constellation Aries.

From Jupiter to Saturn, we walked the same distance we’d covered to reach Jupiter, a little more than a third of a mile on our forest trail, where squirrels and chipmunks chattered back at the kids from safe perches on tree limbs and logs. Actual distance: about 700 million kilometers.

After Saturn, the trail skirted a big meadow where the grasses already reached shoulder-level on most of the kids. We’d walked a little more than a mile when we reached Neptune, the eighth planet, perched on an outcrop. In the distance to the north, we could easily make out the spires of Dartmouth College, rising on the opposite side of the river. In another half-mile or so, we’d reach Pluto, long considered the smallest planet but now demoted to dwarf status, 6 billion kilometers from the sun.

The real sun was beating down on us and a bus was waiting to take the kids back to school. So we turned around and traveled back through the parallel universe, our perspectives realigned, with a deeper sense of the night sky and the scale of our solar system.

Learn more
– .. about the Planet Walk at the Montshire Museum.
– … about the solar system from National Geographic.