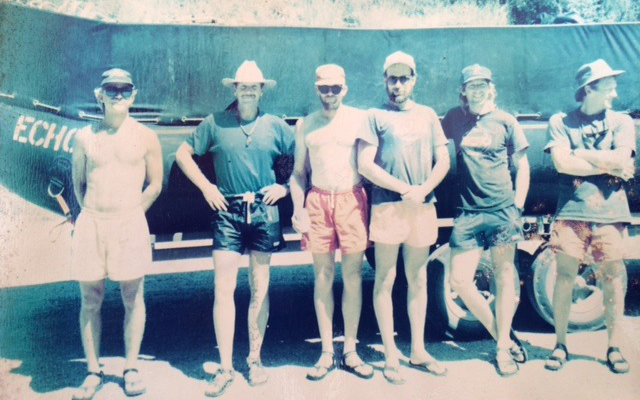 Courtesy of Michael D. BurkeThe author, third from the right in the 1990s, once got paid to guide. Now the Maine river guide gets his grown kids’ respect.

I have given the river safety talk hundreds of times: that pre-launch speech a guide delivers to passengers before plunging into the water. There’s a certain tone you take, a combination of stern yet humorous, intended to make sure guests are prepared but not scared to death. Your audience is usually attentive, respectful, even a bit in awe. After all, you are The Guide.

But my 35 years of guiding out West—on the rivers of Idaho, Oregon, California, and Alaska—were over a long time ago. On this day in July, I was addressing my three adult children and their partners. I was not The Guide. I was only Dad, father-in-law, partner’s father. And old enough for senior citizen discounts.

We were on the banks of the Kennebec River in Maine, surrounded by dozens of rafting companies. The professionals had finished their instructions when I cleared my throat and began.

My charges turned to look at me attentively, with more concentration than they’d ever given me as kids. Strange to have your children listen as though your words matter.

I went through the routine which, despite the gap of a decade, I settled into as comfortably as if I’d given the talk a week before.

The Kennebec Gorge is a nice ride, a short but intense bit of whitewater. One of its more daunting features is that the rapids begin immediately once you leave shore and are relentless for the first few miles: Taster and Rock Garden and Sisters and Z Turn and the Alleyway, one after the other, waves and cross waves and sometimes a thrashing hole or two, interrupted only by the interlude of Cathedral Eddy.

Even so, the gorge isn’t trickier than the rivers I’d run in the West. But there at the put-in, I was apprehensive in a way I hadn’t been before, even on those occasions when I’d guided trips in raging high water, or while it was snowing, or on a river whose rapids were a new challenge to me. In those cases, the passengers were customers who had paid to come.

Now my fellow paddlers were my family members, and I had invited them. My responsibilities—weighty enough when the guests were strangers—were compounded in a way I hadn’t anticipated. After all, it’s a parent’s job to protect the children, even if those children are in their 20s, 30s, 40s, and 50s. The question had occurred to me only the night before: Was this trip a good idea?

I’d slept poorly, imagining various unsavory outcomes: a first-time-rafting fiancé falling out and being traumatized by the experience; the raft flipping at Magic Falls and chaos ensuing, especially without a backup vessel (always a bad idea); someone slicing a finger on the sharp shale on shore and me neglecting to bring a first-aid kit; mayhem and wounds and my wife never forgiving me until the end of time.

I’d also wondered if I could muster the same authority I had when paying guests implicitly agreed to the principle that I was The Guide, the one who knew how to get them down the river safely and whose advice should be heeded. Would I feel slightly ridiculous shouting out crisp instructions to my children and their partners? Would they feel slightly ridiculous obeying them?

As with most river experiences, the water cured all worries. Once we got the raft down the long metal ramp to the edge of the Kennebec, and after a few final reminders, we pushed off. I had no choice but to tell them what to do. What a pleasure, telling your adult children what to do! And to have them do it perfectly! What a relief to return safely, all body parts and relationships intact!

Oh, and the rapids were fun, too.

Michael D. Burke is a professor of English and the director of the creative writing program at Colby College in Waterville, Maine.