A Walk in the Woods with Uncle Rik 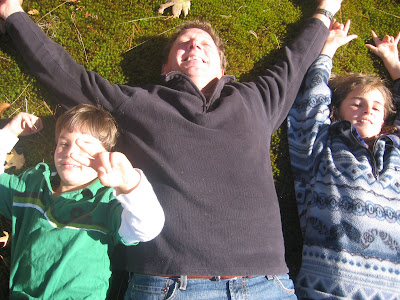 We had a guest last weekend – Uncle Rik, who came all the way from Washington State to hang out with Ursula and Virgil, and maybe also squeeze in a few moments with their parents. We had big plans for his visit: Ursula, who has just started fencing lessons, wanted to take him to a special workshop. Virgil couldn’t decide which 10 board games he wanted to play with his uncle. Jim planned a tour of the nearby Dartmouth campus. I pictured catching up with my brother over double cappuccinos, but I also hoped we could take the kids in for their seasonal flu shots and that we might join one of the “350 Day” activities.

Saturday was no day for sight-seeing — no day to be outside, period — not when several inches of rain fell in as many hours. So when Sunday dawned bright, clear, and warm (for late October), all our other plans fell away and were replaced by a simple imperative: Let’s get outside.

We walked out our front door, across the road, and down toward the barn, where we veered off onto a woods trail. We cut that trail a few years ago, but I noticed that it’s grown brushy from disuse. On the other side of our stone wall, the trees give way to our neighbors’ open fields. Ursula led the way across, singing out that it was really wet, but she didn’t mind because she had her rain boots on. The rest of us hop-scotched soggy hillocks and jumped a stream that had widened with runoff, Virgil clinging to Jim’s back.

I don’t think of myself as taking where we live for granted. We tell people that we live on a pond, that the long lovely ridge that forms the pond’s backdrop is state park, that if we wade far enough into the water , we can peer around a small hill to see the fire tower on Mt. Cardigan. We swim in the heat, ski on the snow, skate on the ice, and ramble through the woods in all seasons. But Rik helped me see this little spot of New England with fresh appreciation. He breathed in the smell of the leaves that crunched under our feet and the smell of the pond, in deep, chest-expanding breaths. I could see that the smells reminded him of places we’d lived, growing up, that they were delivering memories of childhood itself. The Northwest, where he lives now, doesn’t have the same smell, or trees, or fresh water. He dug into the leaves and pulled up an acorn with its cap still on. “Could you help me find a few more?” he asked Ursula and Virgil, who were amazed to learn that oaks, and therefore acorns, were uncommon where Uncle Rik lived. 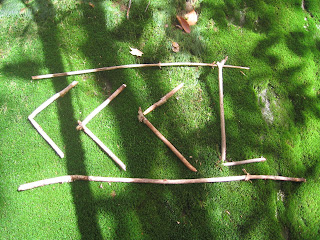 We stopped at a large rock covered in brilliant green moss. Ursula and Virgil broke off some twigs and placed a 350 in Roman numerals against that green carpet. We found another small stream and stopped beside it. Virgil looked around for dead branches to build a fire for our marshmallows, chattering happily. Jim and Ursula created another 350, with acorns, underwater. 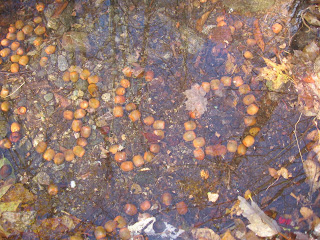 I led Rik up a steep gully to an overlook. The pond sparkled below us. The same breeze that ruffled its surface rustled through the trees overhead, coaxing, playful. We stood there for a few moments. Rik told me that he saw something in Ursula and Virgil that he recognized from our childhood, something that came from spending time in the woods, by streams, around dirt and leaves and moss. “It fills me up,” he said, tapping a fist over his heart. “And it’s always in there, there for you to draw on when you need it.” I knew exactly what he meant.

Then we raced each other down the hill to marshmallows.

Learn more
More on our little spot of woods on the bestkidfriendlytravel.com site.