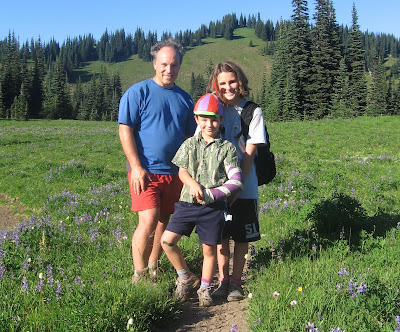 Outside magazine is not normally a place I turn to for parenting advice. So I was intrigued when a link to a Father’s Day-themed series in the magazine came across my desktop. Some of Outside‘s macho attitude came across with it: The text to the link asked, “Are You Raising a Wimp?” and offered “Essential Advice for Adventurous Fathers.”

Here’s how the article started: “They say that becoming a dad means your days of big trips and serious adventure are over. They are so wrong. Starting this Father’s Day, be your hard-charging self again. It’s what your kids need most.”

It then cited a statistic from a recent study by the nonprofit Outdoor Foundation, which the Outside editors phrased this way: “75 percent of kids aged 6 to 12 who participate in adventure sports are simply copying their parents.” Their concluding advice — “[Y]our first act as an awesome outside dad is to walk out the front door.”

I understand the outdoor adventurer’s desire to keep getting out — into the mountains, onto the trail, on the river, on the rock. And being a mother or father needn’t prevent us from going off on serious adventures. But being “an awesome outside dad” takes much more than heading for the hills without the kids.

Other statistics collected by the Outdoor Foundation but not included in Outside‘s article make it clear, in fact, that if fathers want their children to become “hard-charging adventurers” in their own right, then Dad needs to walk out the door with kids in hand — even if that means scaling back his own adventures for a time. It makes sense that young children are heavily influenced by their parents’ choices. If you’re 6 years old, or 12, you’re most likely to go hiking or participate in other outdoor activities if your parents take you. The second most common reason children in the study gave for not spending time outside, after “not interested”: “My parents don’t take me.”

Another part of the magazine’s Father’s Day package sends this message exactly. The editors asked some of their best-known writers, Ian Frazier and Mark Singer among them, to contribute essays on fathers. I recommend ignoring the introductory article and accompanying gear guide (unless you’re just dying to buy an igloo-building kit) and instead reading their thoughtful meditations on fathers and the outdoors.

Advice for adventuring fathers from Outside magazine writers:
– More patience, less danger. Steve Rinella, host of the Travel Channel series “The Wild Within,” remembered a father who threw him off a dock to force him to swim and who barred his sons from coming inside on bitter winter days. Rinella writes, “He didn’t want to raise a thin-skinned softy who couldn’t handle hardship.” But now that Rinella is a father himself, he is looking “to create a future that we can remember with fondness.”
– Focus on what you can share. Ian Frazier did not share his father’s mechanical aptitude: “He told me I didn’t have the brains God gave a screwdriver,” Frazier writes ruefully. But they did share a love of rambling, whether on foot or behind the wheel of a car. So the two hiked mountains and drove across the country — and the tinkering gene skipped a generation to Frazier’s son.
– Teach them to be safe and let them make mistakes. “Never take your skis off,” Marc Peruzzi’s father told his 7-year-old son, who quickly discovered the limits of such advice. Peruzzi arms his children with perhaps more useful safety information, then lets them roam.
– Less is more. “If I could have one do-over,” Mark Singer ruminates about being a father to four sons, “it would be to have spent less time telling them what I’d done in my life, what arcane knowledge I’d accumulated. If only I had just listened and absorbed what the world looked like through their unadulterated, as it were, eyes.”

Being an adventuring, role-modeling father is hard work, harder in some ways than the adventures themselves. But it’s hard work during a relatively short window of time. The Outdoor Foundation study shows that by age 13, kids are making choices increasingly influenced by their peers. So, Dads, walk out the door — and take your kids with you when you go.