Afraid of the Dark No More: A Trail Caretaker Learns to Love the Night 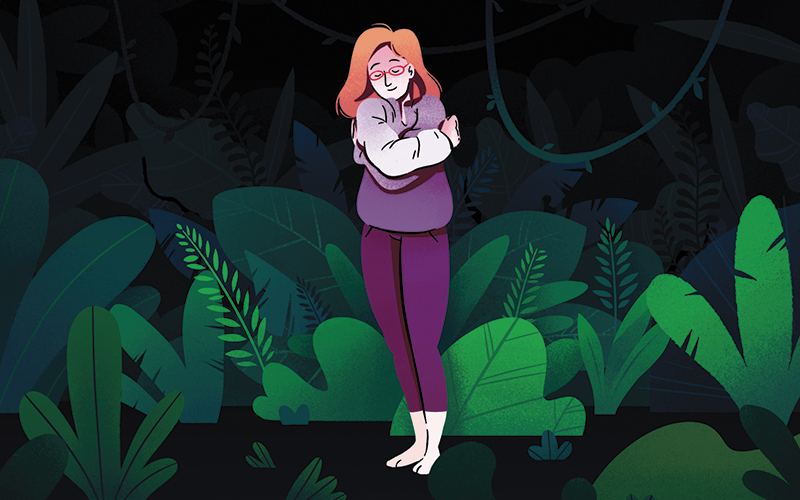 Illustration by Ethan ThorntonThe author used to be afraid of the dark. Then she became a backcountry trail caretaker—and learned to love the night.

I remember how I used to look at the woods at night. You see them in every horror movie, right before you lose cell signal, and there’s nowhere to go in the sudden snowstorm except for the creepy cabin at the dead end of the gravel road.

I lived in that cabin—briefly. On Camel’s Hump in Vermont, there’s a ranger cabin with no electricity and a bona fide graveyard behind it. It’s the darkest place I’ve ever seen. Thick treetops block every bit of light. After a summer spent hiking the Appalachian Trail, I’d lucked into a job as a caretaker on Vermont’s Long Trail. The cabin, my fellow caretakers assured me, was haunted.

I don’t believe in ghosts. But that first night, I heard things that made me believe. I heard nails scrabbling against wood, water splashing where there was no tub or sink. I pulled on my headlamp and tried to find the source. I failed. I barely slept.

The morning light revealed a closet door I’d overlooked. Inside was a handcrafted mouse trap: a stick covered in peanut butter that revolved over a bucket of water. Several mice had met their end. Sick to my stomach, I dumped their soggy corpses outside.

After a couple days at the cabin, I moved partway up the mountain to Hump Brook tent sites. Hump Brook was spectacular. For starters, it wasn’t in a hollow, so it didn’t get dark in the late afternoon, like the cabin did. My tent made a cozy shelter, with zero deathtraps or dark corners. Hump Brook, allegedly, had a haunted stream that spoke with a child’s voice, but while the stream babbled, it never seemed unfriendly.

Fall turned the birch leaves bright yellow, and the chill chased the hikers from the woods at sunset, freeing me from educational talks about composting privies. After dinner at another caretaker’s site, I wasn’t the only one heading down the trail. A barred owl flew with me, keeping me company almost the entire way. It had a face like a skull, and I was alone in the dark, but we both belonged there.

Besides, Hump Brook was a place where other people got scared. Once, an older couple from New York got lost on the mountain. I found them shouting in the dark and led them down to their car with my headlamp; they rewarded me with thanks and bottles of Perrier. The woman in her fur coat looked like she’d teleported from Fifth Avenue. I was a feral human: dirty, deep into my 10-day shift, and entirely comfortable in the dark. A change had taken place. The woods were my home.

The following season, the Green Mountain Club sent me to Little Rock Pond. In the evening, after most of the hikers had retired to their tents, I realized something nifty happened at dusk.

It takes place just after sunset, when the thru-hikers are already snoring. The birds go silent. Bats flit across the sky, black cutouts against a slightly-less-black backdrop. Waves lap on the rocks, and a beaver tail slaps the water, announcing the beginning of the night shift. I revel in the familiar sounds and forgo a headlamp; I know every inch of trail. It’s a wonderland, and after dusk, it’s all mine.

There’s a canoe stashed in a place only I know. I jump in, push off, and paddle my way across the lake. A year earlier, I’d watched a meteor shower reflected in a similar lake. It was spectacular, but I’d been happy to get back to my tent. Now, out on the lake, I’m part of the night. I paddle quietly. After all, I don’t want to scare anyone.