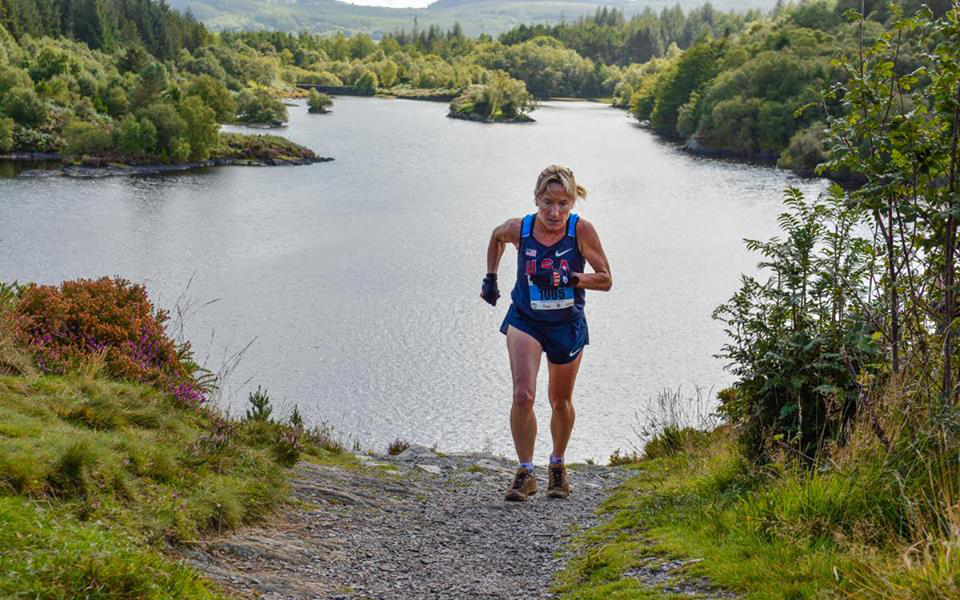 Courtesy of Nancy HobbsNancy Hobbs, founder of the American Trail Running Association, tackles a rugged hill at the 2015 World Mountain Running Championships in Wales, where she finished as runner-up in the master’s 55-59-year-old division.

If you started running on trails in the past 10 years, or registered for your first ultramarathon, or broken into a jog on a mountain hike, you have, to some extent, Nancy Hobbs to thank. In roles with the United States Olympic Committee, U.S.A. Track and Field, Road Runners of America, and as co-founder and executive director of the American Trail Running Association (ATRA) since 1996, Hobbs has helped bring trail and mountain running from the hyper-specialized into the near-mainstream. For the past 23 years, she’s led ATRA, whose sole purpose is to support and grow the sport. As of press time, she’s just back from the World Mountain Running Championships in Villa La Angostura, Argentina, where all six U.S. teams placed in sixth place or better and three individual Americans won their respective races. Meanwhile, Hobbs isn’t a shabby runner herself; she placed second in the master’s 55-59-year-old division at the 2015 World Mountain Running Championships in Wales. AMC Outdoors sat down with Hobbs to discuss the origins and growth of the sport, diversity on the trails, caring for the land we use and love, and more.

RW: How did you get into trail running?

NH: I started running on trails in the ’80s. There wasn’t an association dedicated to trail and mountain running. There was the American Hiking Association, which did hiking stuff. Then we had a summit in 1995 of industry folks and others who decided it would be a good idea to start an association. I took that ball and ran. American Trail Running Association formed in 1996. Little by little its grown from a small budget to a larger budget to greater breadth.

Describe the trail running landscape in the 1980s and early 1990s.

It was a different world 30, 40 years ago. The opportunities for women and young girls weren’t there, for instance. I ran to play other sports, like field hockey, softball. The competitive arena wasn’t what it is now 30 years ago. We only started sending women to the [World Mountain Running Championships] in 1995. We started there, and we were at the bottom of the heap in terms of competition, and we’ve worked our way up and created a really good program.

There were a handful of races [back then], and the people who ran on the trails did it under the radar. It was a different time in social media, too. There weren’t people taking selfies on the trail. It was more organic, the reach. People would get [race] results from event hard copy. Clearly, there were fewer people. The other thing that’s changed over time is you’re getting a little more diversity in the population base for participating. You didn’t find a huge color palate on the trails.

What do you see today?

I see a lot more people on the trail. For instance, [at the 2019 World Mountain Running Championships] in Argentina, there were 2,000 people running over the weekend. The diversity in the group that was out there on the trails, not only with the intense elite competition, but the weekend warriors as well, was incredible. You had people who are fast, not fast, and everything in between. You had all shapes and sizes. It was really great to see that.

[Editor’s note: In 2017, “running, jogging, and trail running” were the most popular American outdoor activity, with 55.9 million Americans—or 19 percent of the population—participating, according to a 2018 Outdoor Industry Association report. Trail running participation, specifically, doubled between 2007 and 2017 to more than 3 million Americans, according to the same report. Perhaps most hopeful for Hobbs and other trail running boosters is the growth among young Americans: 7 percent of young adults, ages 18 to 24, tried trail running in 2017, compared to 3 percent in 2007. Ultrarunning Magazine, which keeps statistics on the growth of ultramarathoning, reports year-over-year increases in the size and number of ultra races and number of finishers.]

Do you have any theories as to why the sport has grown so much, so quickly?

Brand after brand is making trail running-specific gear. How has that contributed?

If the consumer doesn’t want it, then the company’s not going to make it. You also have brands developing products specific to women, to conditions people will experience on the trail. You have trail-running poles by Leki, you have hydration packs by Camelback and others, you have Gore-Tex shoes.

Are there any challenges you see or foresee?

One of the big issues we’re going to be facing and are facing is the amount of people on the trails—“loving it to death.” It’s a double-edge sword: everybody wants to be active and be outside, but we still need to preserve and protect the spaces we love.

The number one thing is preservation and maintenance. That’s a key thing about our focus [at ATRA]. And education is part of that, providing resources for where people can go to work on the trails and give back—their time, talents, or treasure.

What are you most excited about?

The opportunities and sharing the love of the sport with others.