Shark Attack Mitigation Systems has developed wetsuit patterns specifically designed to deter shark attacks and has licensed the technology to Radiator, which is now offering the world’s first line of shark-deterrent wetsuits.

You can read all about the fascinating science and research that went into developing these patterns, but the essence of it is this. Sharks use many senses to locate potential prey, but vision is the primary method by which they finally determine whether something is worth attacking or not. So an effective pattern for deterring shark attacks must either 1) convey to the shark that the potential prey is not worth the effort or 2) prevent the shark from readily seeing the potential prey in the first place. 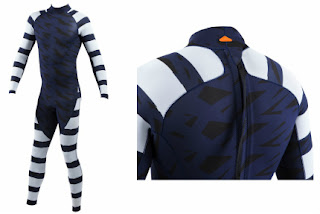 The first approach was used to develop the pattern now being used in the Radiator Diverter surfing wetsuit (pictured). The striped pattern is designed to make the wearer unrecognizable to the shark as potential prey and/or indicate to the shark that the wearer is a potentially dangerous thing to eat (many poisonous fish also have similar striped patterns). Similarly designed shark-deterrent stickers are also available for the bottom of surfboards. 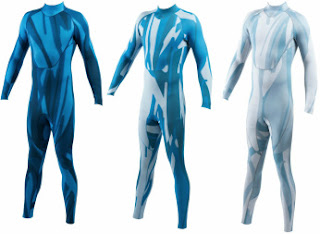 The second approach was used for the Radiator Elude line of diving wetsuits, in which a complex pattern of blues and whites are used to prevent the shark from seeing the diver within the water column. The shading varies depending on the intended depth of use.

Shark Attack Mitigation Systems (SAMS) is based in Western Australia, where shark attacks occur more frequently than elsewhere in the world—five fatal incidents have occurred over the past two years—and where surfing, snorkeling, and diving are extremely popular pastimes.

It’s a promising development, and one that seems likely to start appearing in North American waters sometime soon, but as SAMS cautions: “All sharks are dangerous and unpredictable creatures. It is impossible for SAMS to guarantee that 100% of sharks will be deterred under all circumstances with the SAMS technology. Water based activities in the presence of sharks is inherently dangerous and is not recommended therefore we recommend that if a shark is sighted that the user leaves the water.”