EXPLORE AMC
AMC Outdoors > Bulletin: Around AMC > From the Magazine 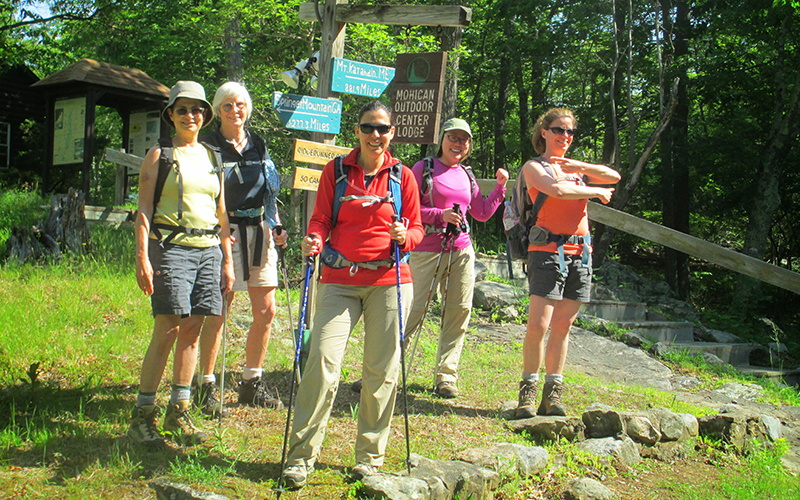 In the 1920s, when Benton MacKaye envisioned the long-distance footpath that would become the Appalachian Trail (AT), he foresaw a series of communities linked physically and figuratively to the 2,100-plus-mile route.

The AT was recognized as a National Scenic Trail in 1937, and MacKaye’s dream of a conservation, recreation, and economic corridor has been evolving ever since, with support from hikers, trail stewards, and host towns. The concept took a big step forward in the fall of 2016, when greater Blairstown, N.J.—the home of AMC’s Mohican Outdoor Center—was named New Jersey’s first official AT Community, as recognized by the Appalachian Trail Conservancy (ATC).

The designation officially was conferred on the Greater Blairstown Area Community Partnership, which includes the townships of Knowlton, Hardwick, Hope, and Frelinghuysen, as well as Blairstown, says Julie Judkins, the manager of the Appalachian Trail Communities program.

ATC, the trail’s primary stewardship organization, had previously named 40 other locales, from Maine to Georgia, as trail communities, including Harpers Ferry, W.Va., the home of ATC headquarters. The latest additions—Dalton, Mass., and Manchester Center, Vt.—were designated in March.

Any town near the AT can apply for the recognition. Representatives must obtain a letter of support from a local AT-maintaining club and form an advisory committee. The committee then has a choice of hosting an annual event or a work project, such as developing an AT-focused educational effort or a service-learning program, or incorporating language protecting the AT into local planning ordinances or guidelines.

To celebrate its designation, the Blairstown committee scheduled Blairstown AT Day, a community fair, for Earth Day 2017—April 22—with a ceremony, music, and trolley tours to local sites.

AMC, which had a seat on the committee due to Mohican’s proximity, pledges to support the effort as it progresses. Located directly on the AT, Mohican Outdoor Center offers outdoor-education programming and hosts day and overnight guests, including an increasing number of AT thru-hikers, at its campground and cabins.

“We’re excited about this designation and we’ll be working with our neighbors to help hikers and others learn about the importance of the AT in this region,” says Vinnie Spiotti, AMC’s director of lodging operations.

ATC sees this increased visibility as one of the pros of the designation. Other benefits include greater environmental stewardship, economic stimulus, and promotional support from ATC. According to the organization, more than 2 million people access the AT each year, and the trail is credited with as much as $168 million in annual spending in communities along its length. ATC credits long-distance trails with creating jobs, enhancing property values, and attracting new business to local communities.

Blairstown isn’t the only AT Community near AMC destinations. Monson, Maine, which lies along the driving route to AMC’s Maine Wilderness Lodges in the state’s 100-Mile Wilderness, received the designation in 2012. And in March, representatives of Gorham, N.H., just north of AMC’s Pinkham Notch Visitor Center, applied to become an AT Community, with AMC’s backing.

The designation “is an important step in confirming Gorham as an outdoor recreation base that celebrates and preserves its mountain heritage through service and engagement with trail visitors,” wrote Walter Graff, AMC’s senior vice president, in a letter of support.

Learn more about ATC’s AT Community program and read about the Appalachian Trail.