A snow shovel is an essential piece of gear when you’re heading into the winter backcountry, especially when you’re going deep into the mountains or out on a longer, multi-day trip. You’ll need one for an emergency snow shelter, for setting up winter camp, or for digging somebody out of a slide if the worst happens in avalanche country.

When selecting a shovel, there’s a big trade-off between weight and blade size. If you expect to be using it regularly (e.g. winter camping trips), I recommend a larger blade size. You can move a lot more snow more quickly when you’re setting up camp. If you’re carrying one for the just-in-case emergency scenario, going smaller and lighter is perfectly fine.

Another key feature to evaluate is the handle type. Most shovels feature a T-handle design but I strongly prefer those few that have a D-handle instead. D handles are much easier to use with mittens, my preferred winter handwear system. Also consider how far the shovel handle extends. If you’re going to be doing a lot of digging, a longer handle is nice, especially if you’re tall like I am.

Most snow shovels you’ll come across are made by three manufacturers: Voile, Backcountry Access, and Black Diamond. Here are my favorites: 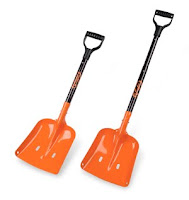 My favorite. Telescoping handle makes this the longest of any shovels. The aluminum used in the large blade is also much harder than other shovels (“T6” refers to the level of hardness), which makes it easier for digging through tough icy snow or concrete-like avalanche debris. The big drawback is that this is on the bulky and heavy side of things (1 pound, 14 ounces). There is a smaller version of the shovel, the Mini Telepro T6 Avalanche Shovel, that’s 5 ounces lighter due primarily to its smaller blade. Both retail for $48. Another interesting Voile option is the short, large-bladed Voile XLM Avalanche Shovel.

With one exception, all of the Backcountry Access (BCA) shovels feature a T-handle. Of the lot, I like the lightweight Tour Shovel (pictured), which weighs in at only 16 ounces ($40); or the Traverse EXT Shovel, which is basically the same shovel with an extendable handle for an extra 4 ounces ($45). BCA also makes some slick saw/shovel combos—the Arsenal Shovel/Saw System—which include a snow/wood saw integrated in the handle. Finally, the one D-handle option from BCA is a serious snow mover, the Chugach Pro Shovel EXT. It has the biggest blade of the lot and an extendable handle but is heavy and bulky (2 pounds, 6 ounces; $60). Good if you need to move a lot of snow. 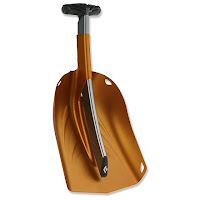