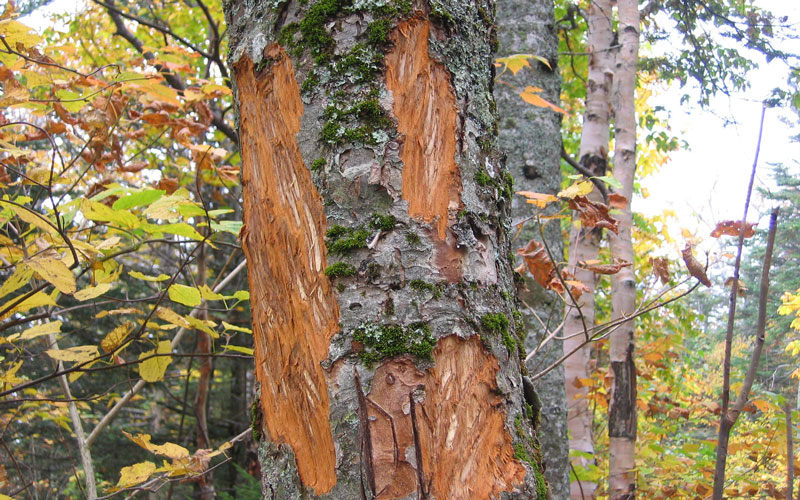 So, you and your kids can tell the difference between dog tracks and coyote tracks, and you know bear scat is nothing like deer scat, and that owl pellets aren’t actually the same thing as owl droppings (a common misconception).

Next time you’re outdoors with your family, whether it’s in the back woods or just in a neighborhood park, take some time to look for other, less obvious signs of animals. There are several clues animals leave behind that go unnoticed because we aren’t looking for them.

Nancy Ritger, AMC huts and Cardigan Lodge program manager, who’s often out in the backcountry, offers some tips for figuring out what animals may have recently been in the area, from scouring the ground for nibbled acorns (signs of rodents like squirrels) to examining fences for snagged fur or hair (signs of fox or deer). If you can find and follow an obvious animal trail in the woods, look for broken twigs and fur stuck in branches along the path, which can offer hints as to what animal uses that route.

Ritger says to keep an eye out for leaves and shrubs animals might have been “browsing” or eating. “Hares can snip off leaves because they have sharp incisors, so there’ll be a sharp cut, while deer and moose, lacking incisors, shred the leaves.”

If bears are known to have been in the vicinity, looking for claw marks on trees is an obvious start, but Ritger says beech trees are especially enticing for bears. “If the tree is big enough, bears will climb up and pull the branches toward themselves to eat the nuts,” she said. Besides claw marks and scat, look up higher for broken branches where the bear might have been snacking.

Other signs to look for in trees are woodpecker holes. Ritger said Pileated woodpeckers leave deep rectangular holes, which they drill to look for carpenter ants. Downy woodpeckers leave smaller, rounder holes, in a hunt for bark beetles and larvae. Trees also can hold signs of other animals. Moose sometimes rub against trees to dislodge ticks, while male deer often rub their antlers on them to shed antler velvet. Both activities result in missing bark.

If you’re wondering how to tell if a wild animal or just someone’s pet dog has been roaming through the neighborhood, Ritger said behavioral clues are a good indication. “Pets are fed and not necessarily interested in food in the wild,” she said. “They’re reacting to smell, running around, not hunting.” A fox or coyote, on the other hand, is looking for sustenance to survive and doesn’t have time to play since it’s conserving its energy.

The National Wildlife Federation offers several suggestions for animal activities for kids. One that can be especially rewarding for children is to look for animal homes. Birds’ nests, beehives, spider webs, beaver dams, tree hollows, and burrowed holes in the ground are relatively easy to spot and identify. And as you and your family look for animal signs, remind your kids that while animals may leave traces behind them, your goal should be to leave none.

Get tips on raising the next generation of outdoor enthusiasts in Great Kids, Great Outdoors and find more trip ideas in AMC’s community for families, Kids Outdoors.

Along with Ethan Hipple, Kim Foley MacKinnon writes AMC’s Great Kids, Great Outdoors blog. She is a Boston-based editor, journalist, and travel writer whose work has appeared in the Boston Globe, AAA Horizons, Travel + Leisure, and USA Today, among other publications. Kim has been writing about what to do and where to go in New England since her teenager was a toddler. Her latest book for AMC is Outdoors with Kids Boston.