It’s an exclusive, but rapidly growing, group. Nationwide in 2012, an average of 0.6 percent of journeys to work were done by bicycle—a percentage that has increased dramatically over the past two decades. 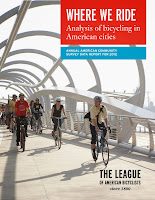 The League of American Bicyclists has released Where We Ride: Analysis of bicycling in American cities, which takes a deep dive into the bike commuting data captured in the 2012 American Community Survey by the Census Bureau.

The full 40-page report is chock-a-block with chart after chart that covers everything from cities with the most cyclists to bike commuting habits by age group and location.

Scrolling through the walls of a numbers, a few interesting findings jumped out:

As this recent New York Times article points out, the world will be a much happier, healthier place if these trends continue. Ride on!