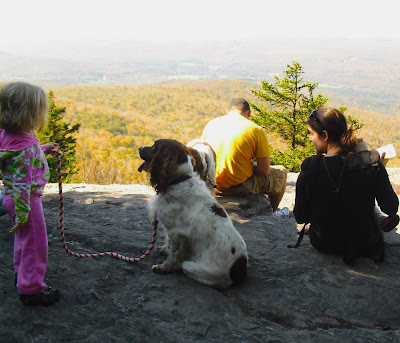 An occupational hazard of writing this blog is that no matter where I go, I think about kids in the outdoors. This past weekend, for example, we attended a wedding in Waitsfield, Vermont. Before we left home, I was mostly concerned that we’d packed our wedding best and knew where we were going.

Our first morning in the Green Mountains, though, I realized that we had enough time before the ceremony for a short family hike. While other guests quizzed our innkeepers on the best places to shop or to see fall colors, I asked a father sitting with his 9-year-old son at the table next to ours — the two of them up from Philadelphia on an annual hiking trip — for recommendations.

I’d asked the right guy: Jim, the dad, had spent childhood vacations nearby, and had continued the tradition with his own family. He and his son, A.J., seemed to know every trail in the area, from woodland rambles along the Mad River outside Warren (the trail starts at the airport, where you might see gliders take off, soar, and land) to longer and steeper climbs. I didn’t think we could squeeze in a 6-mile roundtrip climb of General Stark Mountain, but I was pleased that he thought we might.

“What about a ridgeline walk?” I asked.

“Ah! Then what you want is Sunset Ledge on the Long Trail,” he replied. We were to follow the north-south highway, Vermont Route 100, to the turn-off to Warren’s village center — where, he suggested, we could stock up on food for the trail at the general store. Just past the turn-off to Warren, heading south on Route 100, he told us to look for a sign to Lincoln Gap, and to follow that road west to the top of the ridge. “Even if you miss the trail signs for the Long Trail and Sunset Ledge,” he said, “you won’t miss the cars.”

We followed his directions exactly, buying apples and drinks at the general store, then driving the steep and narrow road up through one of the famous gaps in the Green Mountains between eastern and western Vermont. Jim was right about the cars: They were pulled in every which way on both side of the road. We wiggled ours into a space, then left the road for the woods, following the Long Trail and the ridge south. The morning sun filtered through the hardwoods and still gave off enough heat to warm patches of trail shaded by hemlock and spruce. 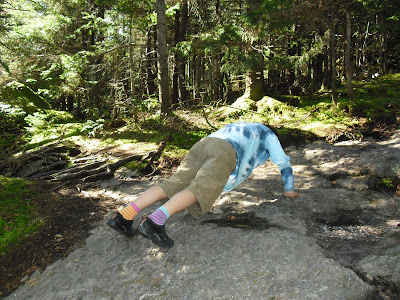 Virgil started a new version of Trailside Olympics, counting push-ups and sit-ups, before deciding that he’d rather duel with his father using long sticks for swords. Ursula and I tried to jump from rock to rock along the trail. Another family passed us on the trail, and I heard the dad say to his daughter, “I used to play that game! We called it Hot Lava.” We hadn’t been calling it anything, but now every step became a matter of life and fiery death. After I fell into the lava, I began another life as Ursula’s rock assistant, carrying a portable landing spot in each hand.

Sunset Ledge, appropriately named, faced west into the wide Champlain Valley. The view stretched across Vermont’s vibrant orange and red foliage into New York, to the high blue peaks of the distant Adirondacks. Other families joined us on the warm rock and soaked up the view.

The hike took less than an hour in both directions. It was enough, though, to make us feel that we’d traveled far, seen amazing sights, and performed great feats. At the wedding that evening, a woman we didn’t know came up to us and said, “Hot lava! Hot lava!” She recognized us from the trail — her husband had given our game its name.

Learn more
– Learn about classic fall family hikes in the White Mountains, Berkshires, Connecticut, the Hudson Valley and Catskills, and near Boston.
– Discover great hikes for families from Yankee magazine’s 2010 “Top 25 Foliage Towns.”
– Other hikes in the Mad River Valley