Biking with Young Children: Trailers, Seats, and Other Solutions 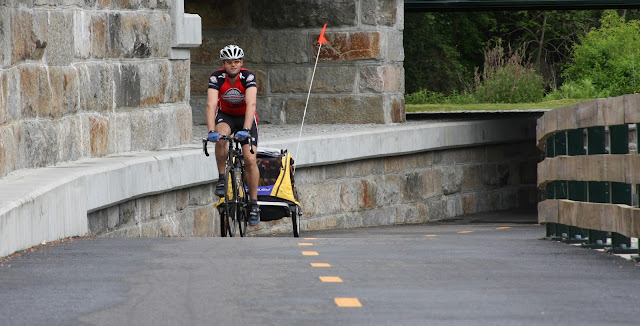 Parents have many options for bringing young children along on bike rides, even before the kids can pedal far—or pedal at all—by themselves. Here are a few ways to start biking with young children.

Trailers
Kids may ride in bike trailers as soon as they can hold their heads up independently. Trailers are low to the ground and unlikely to tip, although their width makes them best for rail trails and road biking on streets with wide shoulders. Attaching a tall flag makes trailers more visible to other cyclists and drivers.

Some bicycle trailers can be converted into pulks, specialized sleds used to pull a child while cross-country skiing.

Bike seats
Seats that attach to a parent’s bicycle are appropriate as soon as kids can hold their heads upright while wearing a helmet and can comfortably sit up on their own. Heather Wyman, who leads family-friendly hikes for AMC’s Berkshire Chapter, used a bike seat on her front handlebars with her son, from about the age of 1 until he was 3 or 4. She appreciated the advantages of having him in front: “You can see him, and he can get a bird’s-eye view of everything.”

Eric Stones, a trip leader for AMC’s Connecticut Chapter, used a seat in back for his son, for about the same ages. It was a great way to introduce him to “the love of being on a bike,” he says. “They can get the excitement of getting places by bike.”

Cargo bikes
Cargo bicycles are less common options for transporting kids than trailers and bike seats, since they usually involve buying a whole bicycle rather than simply modifying a parent’s existing bike. Still, they are growing in popularity. One type is the longtail, which is more than a foot longer than an average bike and sports a shelf on the back to accommodate passengers (you may attach seats) and other cargo. Many other cargo bicycles are based on the European bakfiets style, with a box in front where kids can sit.

Bicycle extensions/Trailer bikes
From about the age of 4, your child may be ready to leave the seat or trailer, but not yet ready to ride long distances on his or her own bike. At this stage, many families enjoy riding with their child on a one-wheel bike extension that attaches to the seat post of an adult’s bicycle.

These extensions, also sometimes called trailer bikes, trailer-cycles, or tag alongs, generally require the child to be ready to sit and hold on to the extension’s handlebars, although some are made with a three-point harness so the child may go “hands free.” The child has pedals of his or her own. On some extensions, the pedals aren’t really functional, but others have a chain attached to the wheel and some even have gears; in any case, the kids can “help” pedal while still having the option of coasting. Parents take care of steering and braking as well as providing most or all of the power.

Bicycle extensions “are a great next step,” Stones says. “The kids have much more fun pedaling.”

Wyman’s son started using a trailer bike at about 3 ½ years old. His had a chain, so he could help power it, and he had his own bell on his handlebars—“a great way to teach kids about the etiquette of signaling ‘on your left’ when you are passing,” his mother says. Although he learned to ride a two-wheeler on his own at age 5 or 6, he kept riding on the trailer bike until he was 7, Wyman says. Luckily, the seats on trailer bikes are adjustable, so the extension grew with him. Both mother and son saw the advantages of letting a parent do most of the pedaling for longer distances.

“If you’re going for 12 or 15 miles, there’s no kid, even one who can ride on their own bike, who wants to go that far,” Wyman says. The trailer bike helped her tackle such distances with her son, but she had to keep his limits in mind. “When kids are tired, there’s this other thing that comes along called cranky,” she says. “There will be mutiny.”

Wyman went on single-track mountain bike trails with the trailer bike sometimes, but only after she was sure her son was ready. “They can be a little like a woodsy roller-coaster in places,” she says. “Steeper hills are tough, as trying to keep momentum is harder with tailweight, and some trailer bikes tend to get wobbly when you are pushing uphill on your own bike.” Paved rail trails with their gentle grades are much easier.

Stones and his son would ride on rail trails for 30 or 40 minutes with the bicycle extension before needing to take a break, then ride for another half hour. “It’s a bit like hiking,” he says. “If you’re talking with them, you can go for ages.”

The father and son used their bike extension for only about a year and a half, from about age 4 to age 5 ½. “Once he could ride his bike, that’s what he wanted to do,” Stones recalls. “He never wanted to be on the tandem again.”

Stones was happy to pass along his equipment, which he had bought used, to friends with kids once his son was ready for the next stage. “You want to get them on a two-wheel bicycle as soon as possible.”

Tips for Biking with Young Kids