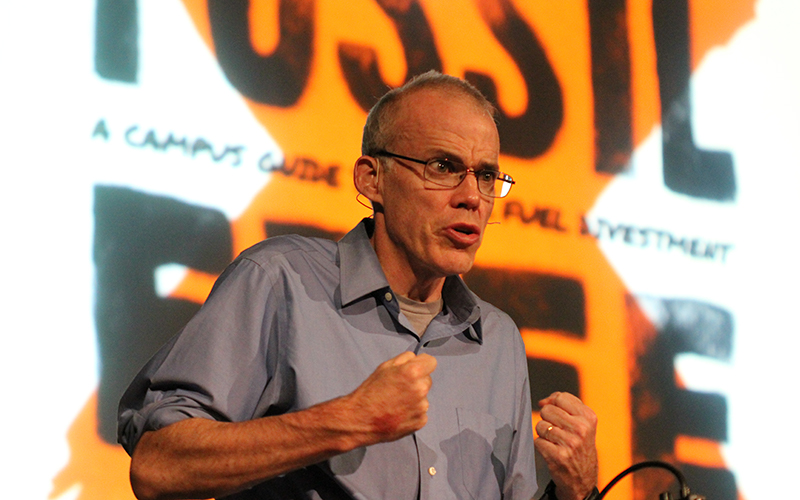 Courtesy of 350.orgBill McKibben frequently speaks to groups about motivating their institutions to divest from fossil fuels.

Bill McKibben may turn 60 this year, but don’t expect that milestone to slow him down. McKibben, who helped grow a fledgling student group he founded at Vermont’s Middlebury College in 2007 into a global climate action movement with tens of thousands participating, has been taking environmentalists’ interests right to the well-heeled fossil fuel industry. McKibben is founder of 350.org and the Schumann Distinguished Scholar in Environmental Studies at Middlebury. The Vermont resident tells AMC Outdoors that he’s determined as ever to move the world away from fossil fuels and slow the impending climate crisis he first warned about nearly three decades ago.

Tell me about the last chat you had with a climate skeptic.

Well, I’ve lived almost all my adult life in rural America, divided between red upstate New York and bluer Vermont. So I see lots of people all the time who experience the world through Fox News and so on. But, honestly, rural people are usually pretty clear that the climate is changing. They may not always accept that the change is coming from human action, but if you live your life outdoors, it’s pretty hard not to see that something big is going on.

You first sounded the alarm on climate change 30 years ago in The End of Nature. You’ll turn 60 this year. What keeps you positive and hopeful?

I’m not always positive and hopeful, but I have gotten to watch the relentless growth of movements over the last 10 years, since we began 350.org. It’s really blossomed in the last two years: the Sunrise Movement pushing the Green New Deal, Extinction Rebellion, and especially the remarkable youth climate movement around the world. I’m not at all certain we’re going to win—in fact, there are obviously going to be huge losses in the years ahead—but it is clear to me now that we are going to fight, which does make me happy.

350.org has turned its focus to pressuring big Wall Street banks to divest from fossil fuels. Explain why this is the obvious next iteration of the climate fight.

Because money is the oxygen on which the fires of global warming burn. We’ve done a good job fighting the fossil fuel industry head on, but it’s always going to be a tenacious battle—Exxon doesn’t know how to do anything else, so they will fight to the last bridge. But the big banks, asset managers, and insurance companies? They’re just trying to make a little more money off the destruction of the earth. Chase Bank has increased its lending by 30 percent to oil and gas since the Paris Climate Accords; they could have used that $196 billion in endless other ways, some of which might actually have helped the planet. But it’s simply not OK for them and Liberty Mutual and BlackRock and the rest to keep trying to cash in on climate destruction.

How important are children and young adults to the global climate movement?

Youth are absolutely crucial. 350.org began with seven young people and myself, so I’ve been organizing with people a third my age for years, but now they’re a quarter, or even a fifth my age. There are hundreds of Gretas [Thunberg, the 17-year-old Swedish climate activist] around the world, and they are changing the debate. But, and this is important, it’s not OK to take the biggest problem the planet ever faced and hand it off to junior high school students. Time for the rest of us to step up.

How does a love of the outdoors inform your climate action—and vice versa?

I’ve had the great privilege to live most of my life on the edge of big public land, next to the vast Wilcox Lake Wild Forest in the Adirondacks and on the border of the Breadloaf Wilderness—Vermont’s largest—on the Green Mountain National Forest. That means I have the “real world” to retreat into. People ask me often how I manage to avoid succumbing to despair, and I have a feeling I would long since have done so if I couldn’t regularly retreat into the forests and mountains that I love. Everyone has a landscape that truly captures them, and for me it’s always been the mountains of the Northeast. It calms me down. And, of course, these places—especially the Adirondacks—are examples of real recovery, a kind of second-chance Eden. They’re a reminder that if and when people step back, nature retains some power to step forward.