BioBlitz: How and Where to Try It with Kids 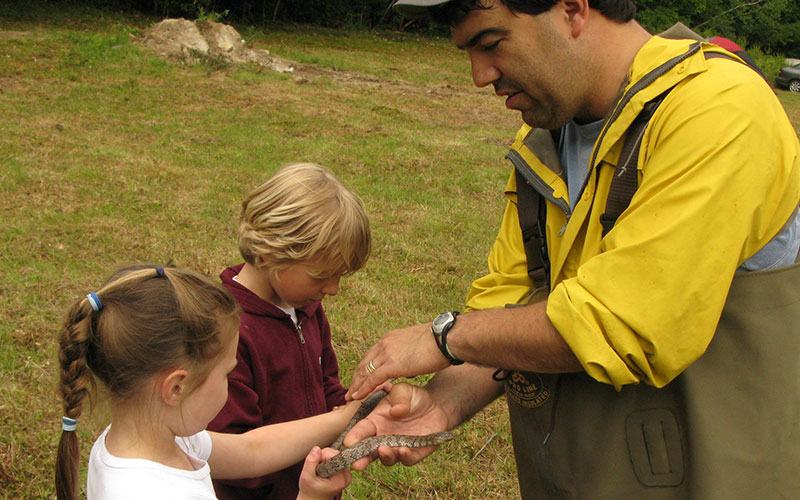 Courtesy-of-RINHSBioBlitzes attract people of all ages and backgrounds.

For kids who like nature, science, treasure hunts, and maybe even a little friendly competition, a BioBlitz is an ideal activity, one in which a whole family or even a school can participate. For anyone unfamiliar with the term, a BioBlitz is essentially a 24-hour program to find and identify as many species of plants, animals, microbes, fungi, and other organisms as possible in a given area.

Usually a scientific or environmental organization plans the event. It puts out a call for volunteer scientists, families, students, teachers, and other community members and sorts them into teams to discover, count, map, and learn about the living things in the targeted area. These events give scientists and the public an opportunity to do fieldwork together and highlight the biodiversity of an area. Often, food, music, games, and other social activities are scheduled as well.

In New England, organizations like Mass Audubon, The Nature Conservancy, and others hold BioBlitz events. This past July, The Nature Conservancy held one at the Green Hills Preserve in North Conway, N.H., where volunteers worked with scientists and local experts to catch moths by moonlight, look for rare birds, track black bears and coyotes, and search for frogs and turtles. There were four science blitzes in all: moths, birding, macroinvertebrates and plants.

The Rhode Island Natural History Survey has been holding an annual R.I. BioBlitz since 2000. Their first year, they had just 33 volunteers who observed 663 species in an urban park in Providence. Today, more than 100 volunteer naturalists come out to survey a different parcel every year. This year the event was held at Rocky Point in Warwick, and in 2015 it is slated to be held in Little Compton.

The nonprofit’s executive director, Dr. David Gregg, says BioBlitzes draw people in for a number of reasons, from parents who want to spend time outdoors with their kids to environmental experts who want to meet like-minded people in interesting places. “It’s a social event,” says Gregg. “We have several families who come every year. Maybe it’s a parent who has gotten their kid interested in what they are [interested in], or their kids just like to run around with nets.”

As for the expert naturalists, it’s a chance to catch up with colleagues and spread the world about their sometimes-esoteric specialties in something like fungi or insects.

A BioBlitz serves a number of purposes,” Gregg says. “It’s a good way to explore your own natural history, your likes and dislikes. You can meet people who are passionate about what you’re interested in.”

Of course, the research done over the 24-hour period is a boon to the area. “You can’t afford to have an expert on everything,” says Gregg. “A long-term goal is to encourage and develop a community of amateurs who can contribute.”

Among the many benefits to participating is the hands-on experience of learning exactly what scientists do in the field, including making observations, recording data, understanding classification, and mapping findings.

A BioBlitz can be as grandiose as the project undertaken by National Geographic, which is working with the National Park Service to conduct a BioBlitz in a different national park each year during the decade leading up to the U.S. National Park Service Centennial in 2016, or as humble as documenting the plants and animals in your local park.

While next year’s National Geographic/National Park Service BioBlitz, to be held in the Hawai’i Volcanoes National Park, might be a bit far away to volunteer for, be assured there are plenty of other BioBlitz events families can join closer to home. Or, you could organize one yourself. On the National Geographic website, videos and tutorials explain how to get started.

Get tips on raising the next generation of outdoor enthusiasts in Great Kids, Great Outdoors and find more trip ideas in AMC’s community for families, Kids Outdoors.

Along with Ethan Hipple, Kim Foley MacKinnon writes AMC’s Great Kids, Great Outdoors blog. She is a Boston-based editor, journalist, and travel writer whose work has appeared in the Boston Globe, AAA Horizons, Travel + Leisure, and USA Today, among other publications. Kim has been writing about what to do and where to go in New England since her teenager was a toddler. Her latest book for AMC is Outdoors with Kids Boston.