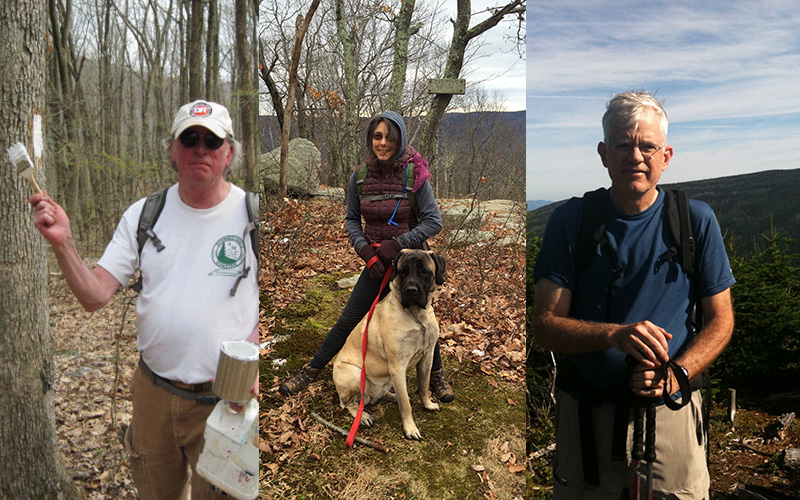 Spend a day with the Appalachian Trail (AT) Committee of AMC’s Connecticut Chapter, and you’ll quickly realize why most volunteers who show up once end up staying for years. These diehard trail workers have maintained the AT’s entire 51 miles in Connecticut since the late 1970s. In that time, volunteers have spent countless hours building rock staircases, water drainages, and bog bridges. As part of our issue dedicated to the centennial of the National Park Service, which encompasses the AT, AMC Outdoors gives a shout-out to everyone who has helped maintain America’s most iconic footpath. Meet a few current AMC volunteers who call the AT a home away from home.

How long have you been a volunteer trail worker?

What skills does a trail worker need most?

Boone: As the Connecticut Chapter AT Committee chairman, being organized is key. A good sense of humor helps keep things in perspective.

Luca: You’ll need an enthusiasm for nature; knowledge of the trail and Leave No Trace principles; plus, an understanding of safety issues, such as campfire policies or tick, snake, and bear advisories. Basically, a general knowledge of it all to inform the large volume of visitors we see on the weekends.

Ward: A love of the outdoors. Part of my work entails map and compass/GPS skills to locate 4-inch aluminum disks called boundary markers. It’s a fun challenge, much like geocaching.

Do you think you’ll ever thru-hike the AT?

Boone: Frankly, I have no desire to do a thru-hike. Too much like work!

Ward: Likely not. I’ve section-hiked all of Connecticut and Massachusetts and parts of Vermont, and would like to hike more when I retire. But I am likely to hike the AT in sections and not all in one season.

Why is volunteering on the AT special to you?

Boone: It’s a great feeling to be involved in projects that serve to further improve the National Parks, which I certainly agree is “America’s Best Idea”—especially the AT.

Luca: The trail nourishes my soul. I feel pure bliss when I am out there, and I love that I can give back to it for all that it gives me. I feel an indescribable energy when I step foot on the trail, knowing that at that same moment there may be hundreds of others doing the same exact thing. It’s as if I feel their steps, and we are all connected for that time. It’s a very powerful feeling. To know that I help preserve the trail for others to experience fills me with immeasurable joy.

Ward: The National Park system is a wonderful resource for the entire nation. It’s an honor to play a small part maintaining the land for all Americans, both now and in the future, to enjoy.