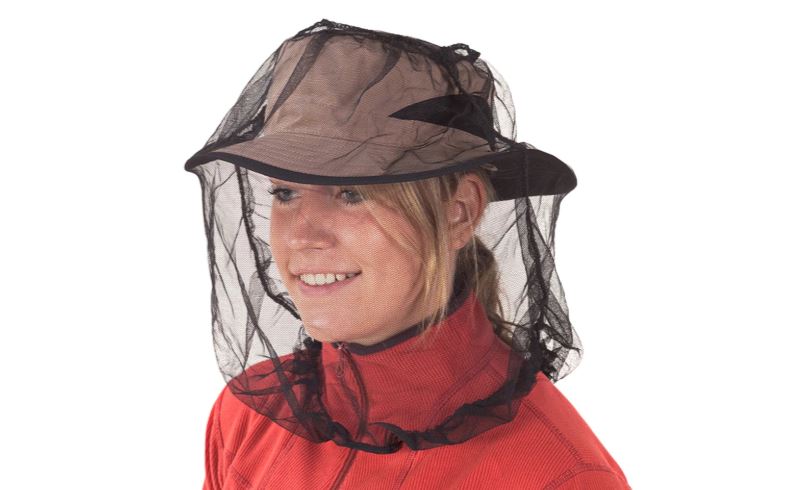 There comes a point when insect repellent just doesn’t cut it. Sometimes the biting bugs are just too thick and ferocious to deal with, whether it’s a swarm of black flies, mosquitoes, no-see-ums, or some other collection of flying blood-sucking micro-monsters. Even if you’re using enough insect repellent to keep them from biting, it can still be crazy-making to have bugs in your face, in your hair, or in your ears.

Everybody has a different threshold for bug tolerance. Some people can withstand clouds of bugs before they’re pushed over the edge. Others freak out at the first appearance of a flying biter. Whatever your threshold, once it’s reached it’s time to consider busting out the ultimate bug defense: a head net.

Head nets are made of fine mesh with holes too small for bugs to pass through. They are lightweight, compact, easy to carry, and once pulled over your head they extend down to your lower neck to create a physical barrier that insects cannot breach. Take that, bugs!

But wearing an impenetrable barrier around your head has some notable drawbacks. You can’t eat or drink through a head net, which means you must lift it up from your face to consume anything or feed your fork, spoon, or drink up under the head net—pretty awkward. A head net partially obscures your vision. If the mesh hangs against your nose or face, it can become intensely annoying. And if you’re wearing it while moving, it can snag or catch on brush, your backpack, or other things.

Most of these drawbacks are unavoidable and can’t really be mitigated; they are just part of the wearing-a-head-net deal. One thing you can address, however, is taking steps to keep the mesh from rubbing against your face. Some head nets—notably the iconic Outdoor Research Deluxe Spring Ring Headnet ($22)—feature a stiffened element around the middle of the head net, which easily keeps it away from your face.  For headnets lacking this feature, you’ll want some sort of brimmed hat to wear underneath the head net. A visor works; a baseball cap or simple sun hat or  ‘bucket hat’ with a short 360-degree brim also work well.

Some head nets feature mesh that has been pre-treated with an insect repellent, including Ben’s InvisiNet XTRA with Insect Shield ($13) or the Sea to Summit Mosquito Head Net with Insectishield ($13; pictured above), which can help keep bugs from landing on your head net and distracting your vision even more than the mesh already does.

So if you’re heading into extreme bug country (or just can’t handle many bugs), consider adding a head net to your outdoors arsenal next time you venture out!