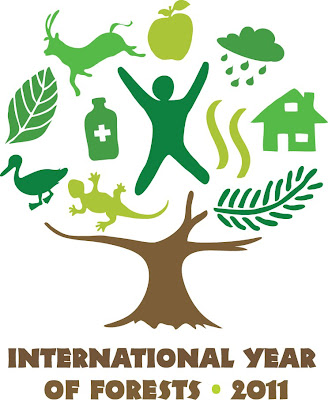 Ursula came home from school this week and told me I needed to see a video on my computer. At first I resisted, thinking she wanted to show me something silly, but she explained that she’d seen the video in science class. “You have to see it,” she told me. “It’s amazing.”

This is how I learned that five years ago the United Nations declared 2011 the International Year of Forests. The resolution adopted then by the General Assembly noted that forests “contribute significantly to sustainable development, poverty eradication and the achievement of internationally agreed development goals.” It also said that forests around the world are under stress and endangered — from climate change, unsustainable logging practices, desertification, and ever-increasing consumer needs — and urged governments, industry, and organizations to reverse the loss of forests worldwide and to develop, fund, and mobilize sustainable forestry.

The film Ursula wanted me to see, “Of Forests and Men,” is the official film for the International Year of Forests 2011. French photographer Yann Arthus-Bertrand took aerial cinematography from around the world to create a 7-minute short film. And, as Ursula said, it is amazing — both in the splendor it shows and in the wide-ranging devastation it reveals. She and I saw clear-cuts, huge slash-and-burn areas, vast monoculture plantings, and mills churning out disposable paper products. We ran it again, and then a third time, mesmerized by its combination of beauty and destruction.

Ursula explained that her science class had been learning about the concept of “Gaia.” In Greek mythology, Gaia (or Gaea) is the goddess of the earth. In science, the Gaia theory proposes that the Earth is a complex, integrated, self-regulating, evolving system. Seeing the forests of the world from the air, as we did in Arthus-Bertrand’s film, gave us both a sense of that complexity and integration.

I bet I’m not alone in having no idea that we’re nearly halfway through a year celebrating forests worldwide. I looked at event listings on the “official U.S. celebration” website (sponsored by the U.S. Forest Service, the National Association of State Foresters, and the American Forest Foundation), and found only a handful across the country for the entire year.

Ursula wants to plan a walk through our woods and post it on the official U.S. celebration website. We’re lucky to live in a place where trees and forests surround us. If you’re similarly lucky, maybe you should consider taking a walk in your neck of the woods, too. We should celebrate our forests, and we should care whether forests around this living planet are being cut down at an unsustainable rate. Watch the film and see if you don’t feel the same.

Learn more
– Learn more about the United Nations’ International Year of Forests.
– Watch “Of Forests and Men” by Yann Arthus-Bertrand