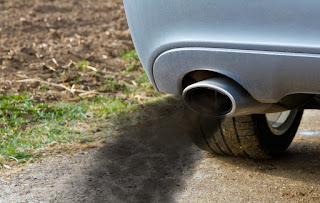 I want kids to get out in nature so they can enjoy all its benefits. Not so they will suffer extra lung damage.

But the truth is, in our polluted world, even the air we breathe can contain invisible dangers. And activities like hiking, which should be healthy, can actually make the problem worse. The Environmental Protection Agency (EPA) categorizes children and adults who are active outdoors as people who are “sensitive” to ground-level ozone because exercising outside causes us to breathe in polluted air faster and more deeply than other people.

The solution is not to stop exercising or to stay indoors. Instead, we need to look at what makes the air so bad for us to breathe and what we can do about it.

Reducing Tailpipe Pollution
One culprit is the pollution that comes from cars and trucks. Although the newer vehicles on our roads are cleaner and more efficient than in the past, the regulations on vehicle emissions haven’t been updated since 1999.

The EPA has drafted new standards, not yet formally proposed, that would reduce nitrogen oxides, organic compounds, and particulates from our exhaust pipes. And these rules wouldn’t just affect new cars: They also would reduce sulfur in gasoline. With less sulfur in the gas we buy, all vehicles with pollution control systems will run more efficiently, meaning an immediate drop in smog-forming pollutants from existing cars.

Advocates say that adopting the new standards would reduce air pollution as much as taking 33 million cars off the road, yet increase the cost of gasoline by only about a penny a gallon.

Some doctors see such changes as a clear public health need. Consider the sober words of a 2009 article on children and asthma, published in a supplement to Pediatrics, the official journal of the American Academy of Pediatrics: “Because the evidence indicates significant adverse effects of air pollution at current levels, there is clearly a need to reduce levels of regulated pollutants such as ozone, as well as unregulated pollutants in tailpipe emissions from motor vehicles. Achieving this long-term goal requires the active involvement of physicians and medical providers to ensure that the health of children is at the top of the list of competing priorities for regulatory policy decision-making.”

Other Steps
Advocating for strong federal standards that would reduce pollution is one good step to protect kids’ lungs. Here are a few other ideas I’ve adapted from the Pediatrics article, which range from national and local policies to behaviors you can adopt at home: