Climate vs Weather: How They Differ, How They’re Connected

Each winter, when snow blankets a normally mild region of the country or a polar vortex sinks large swaths of America into a deep freeze, the questions begin. They mostly boil down to a central idea:

If the climate is warming, then why is it so cold outside?

These questions, even when asked in good faith, reveal a fundamental misunderstanding of the differences between climate and weather. While changes in the climate do affect global weather patterns, climate and weather are not the same and one’s effect on the other is often counterintuitive. We’ll explain why that is in a minute, but first, let’s examine how climate and weather differ.

Climate is what we expect. According to the National Oceanic and Atmospheric Administration (NOAA), climate refers to the weather conditions prevailing in an area in general or over a long period of time. Climate is a general statement or set of averages reflecting what a location’s conditions are in, say, a particular season—like fall or spring. It’s important to remember that different regions have different climates: whereas New Mexico features a warm and dry climate, Maine’s climate is generally cooler and wetter. (Keep reading for more on how global climate change is altering regional climates.)

If climate refers to long-term conditions, weather is the short-term state of the atmosphere at a particular place and time. Climate tells us how much rain/snow/heat/wind/humidity an area tends to get over a season, whereas weather tells us what’s happening outside today. If climate is what we expect, weather is what we get. 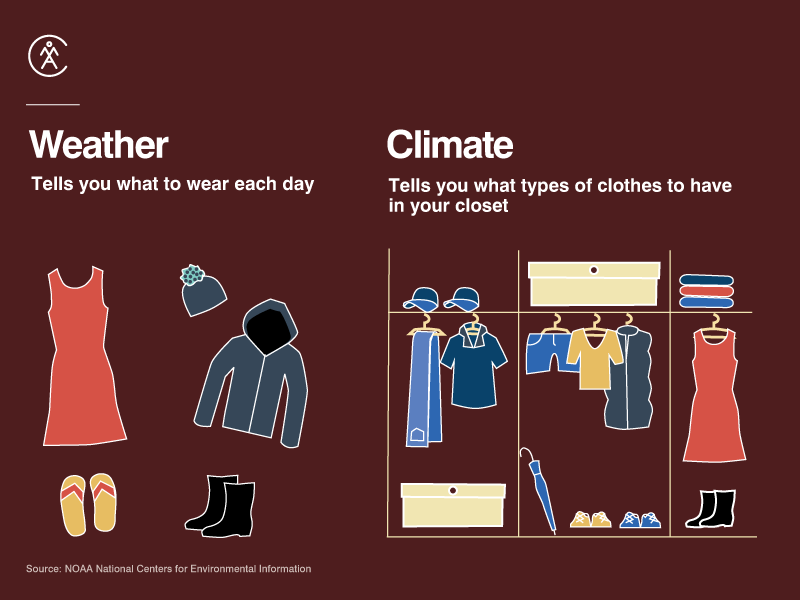 Still confused? That’s OK. Perhaps one of these analogies, some offered by AMC scientists, will help in visualizing the key differences between climate and weather:

Clothes: If weather is today’s outfit (picked out based on today’s conditions), climate is your whole closet (assembled over time based on your region’s overall conditions). I might have a closet full of flannel shirts because I live in the generally cooler White Mountains (climate), but I may wear a tank-top one day in early May because it’s unseasonably warm (weather).

Gardening: Do you have a vegetable garden? You probably decide what to plant each season based on your region’s overall climate. (A lime tree may not grow very well in cool New Hampshire, whereas an apple tree thrives in the cooler climate.) The harvest we reap, however, depends largely on the weather a season provided. Even though the Northeast climate is generally great for growing peaches, for instance, a February thaw and re-freeze can decimate a season’s worth of crop—which is exactly what happened across the region in 2016.

Food: When deciding where to go out to eat (or get takeout), we might choose based on the type of food a restaurant serves: Mexican, Italian, Thai, and the like. This is similar to the climate. If climate is a restaurant’s general cuisine, then weather is a specific menu item available today—or even a “special.” 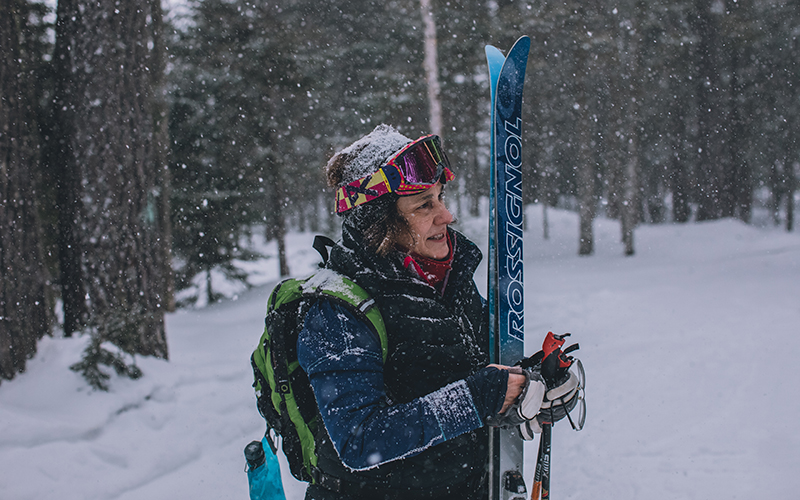 Now that we’ve established the key differences between climate and weather, let’s explore how changes in the climate affect the weather we see on a daily basis. First off, most scientists agree that it’s impossible to say for sure that a particular day’s weather is a direct result of changes in the climate. Those observations are made over many years, not a single day. Climate science is one of the fastest-growing fields, and AMC’s long-term observation of weather patterns has contributed greatly to our understanding of how climate change affects the Northeast and Mid-Atlantic.

While NASA climate scientists have shown that all but one of the 16 hottest years on Earth in the agency’s 134-record have occurred since 2000, they’ve also observed changes in weather. For instance, many scientists attribute the presence of stronger and more frequent storms and hurricanes to warmer seas, which strengthen weather systems as they pass over. AMC scientists attribute changes to New England winters—which are shorter and feature less snow and more sudden thaws and freezes than they used to—to changes in the global climate, at least in part.

What about those polar vortexes that have plunged large sections of the United States into sub-zero territory the past several winters and bring out the climate change skeptics—even those tweeting from the Oval Office? Some scientists now theorize these systems are caused and strengthened by rapid Arctic warming from sea ice loss and climate change, affecting places much farther south with extreme weather. In the summertime, these events have been linked to extended droughts and heat waves.

Want to learn more about the connection between climate and weather? Check out these additional easy-to-understand resources: