Create Your Own Laser Bike Lane at Night

I love high-visibility products. When it comes to riding the roads, especially at night, being visible to drivers means safety and life. Now there may be an entirely new genre of night-time visibility: a tail light that creates a laser-lined bike lane immediately behind you. 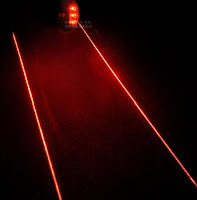 As the video below shows, the bike lane-effect is clearly apparent, especially when multiple riders travel together. (That guy doing wheelies is a bonus.)

I’m intrigued by several aspects of this product and technology:

Don’t look for this exact product in your bike shop anytime soon, unfortunately. A version was initially released in the U.S. in early 2011, but it appears to have disappeared (lost visibility?) since then. There may be patent issues, or some other legal hurdles.

But I would certainly expect (and hope) that this sort of technology—either from Slancio or any of the myriad cycling gear companies—will increasingly appear in the years ahead. Indeed, here’s a basic version of the concept you can buy for only $20.

More on high-visibility gear for cycling:

Now You See Me: Bike lights, reflectors, and high-visibility clothing (2010)
The Best Deals on High-Visibility Jackets and Shirts for Cycling (2012)