Cut & Dried: How to Dehydrate Food for Backpacking 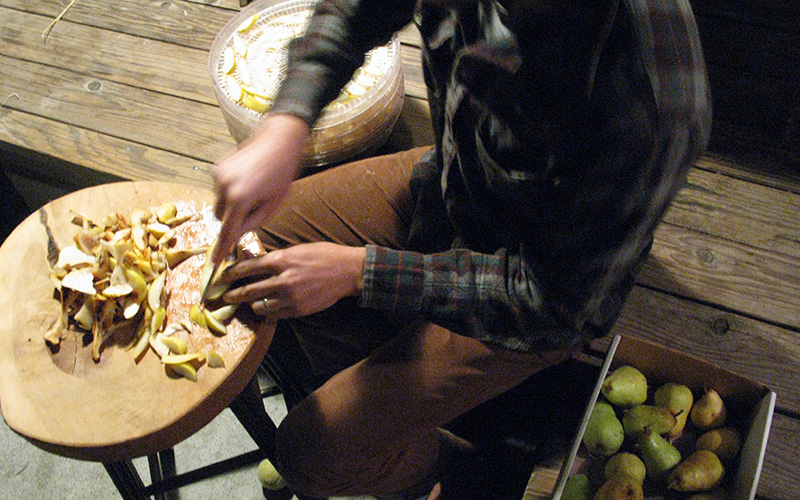 Hold a fresh apple in one hand and a dehydrated version in the other, and you won’t need long to decide which you’d rather carry in your pack. Dehydrating your own food is a lightweight, inexpensive, and easy way to prepare a varied menu, from snacks to full meals, for your next backpacking trip. You just need a dehydrator (as long as it has a heating element and a fan, even the most basic model will do) and some fresh ingredients.

Fruits that dehydrate well, maintaining good texture and taste, include apples, mangoes, peaches, nectarines, strawberries, and kiwis. Avoid watery fruits like grapes, which can take up to two days to dehydrate, and choose fruit at its peak ripeness.

When you’re ready to get started, wash the fruit and remove any undesirable parts, such as skins, cores, and pits. Slice the fruit into pieces about a quarter-inch thick. For fruits such as apples and pears that discolor once peeled, soak the slices in a mixture of lemon juice and water to prevent browning. Thinly sliced canned fruits, such as pineapple rings, don’t need any special preparation.

Lay the fruit flat on the dehydrator trays, leaving space between each piece. Set the temperature to 135 degrees Fahrenheit and wait. Fruit typically takes between eight and 10 hours to dehydrate, depending on the temperature, the thickness of the pieces, and how much space you leave in between them. Properly dehydrated fruit should feel leathery but not sticky (underdone) or brittle (overdone). As with anything you dehydrate, check the pieces during the process and remove them as they finish.

Remember Fruit Roll-Ups? It’s extremely easy to make your own version, commonly known as fruit leather. Start with applesauce or puree fruits of your choice, adding honey, cinnamon, nutmeg, or other sweeteners and flavors. Get creative! You may need to add a little water when pureeing fresh fruits; you’re looking for a final consistency similar to applesauce.

Pour the mixture into one of the dehydrator’s liquid trays. For less mess, you can line the tray with wax paper before pouring in the puree; just cut a hole in the center for air to circulate. Because the periphery dehydrates faster than the middle, spread the mixture so the outer edge is thicker than the inner. Set the dehydrator to 140 degrees Fahrenheit for about eight hours. Rotate the trays at least once for even dehydrating. The finished product will be shiny and should peel off the tray. As with sliced fruit, if it’s sticky to the touch, it’s underdone.

Want some roughage in your trail diet? You can prep vegetables and even complete meals in a food dehydrator. For veggies, start by slicing them thinly. Vegetables that you wouldn’t usually eat raw will benefit from blanching—a brief dip in boiling water followed by chilling—to preserve color and flavor. You’ll eventually rehydrate these before eating, so set the temperature to 135 degrees and dehydrate them until they’re brittle, checking them every hour or so after the first four hours. Once you’re in the backcountry, you can add these to typical backpacking meals, such as quick rice and pasta dishes, to pack in more nutrition.

Or go whole-hog. You can dehydrate entire one-pot meals, such as stews, thick soups, and curries, in the liquid trays. Just don’t get too crazy. If you try to dehydrate a curry dish in one tray and strawberries in another, the flavors will end up permeating each other. Another tip: Thicker foods should be pureed first to eliminate big chunks. While the result might not look as appetizing, it will dehydrate more evenly and the flavor won’t suffer. Spread soups and similar foods about a quarter-inch thick, set the temperature to 140 degrees, and dehydrate until brittle and crumbly. For the ultimate in compact packaging, crush these into a powder once they’re dehydrated using a food processor or a mortar and pestle.

Allow foods to cool completely before storing them in zip-locked bags or plastic containers with tight lids. Your movable feast will last longer at lower temperatures and when stored in cool, dry, dark areas. The more thoroughly dehydrated the food is, the longer it will last. When it’s chow time, first soak your powdered stews and veggies to speed up rehydration then cook them in water until they reach your desired consistency. Dig in!