Deathslog 2011: 4 boys, their dads, and one awesome(ly long) day in the White Mountains 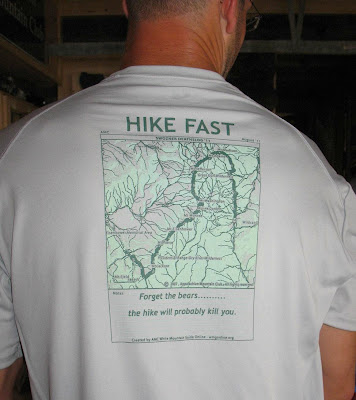 The T-shirts were hard to miss. AMC regional director Ruth “Sam” Jamke was volunteering at Madison Spring Hut last weekend when she noticed a man wearing a T-shirt with a map of the Presidential Range on the back. The map was marked by a long, winding route along the range. She saw that a boy was with the man, and that he was wearing the same kind of T-shirt. The command “Hike Fast” ran above the map, “Forget the bears … the hike will probably kill you” below it. Jamke was especially intrigued by words around a smaller image of a hiker on the shirt front: “Deathslog 2011. No crying.”

Then she realized that there were eight of them — four dads, four sons, eight T-shirts — and, judging both from the T-shirt maps and the group’s triumphant expressions, one very long hike.

Scott Switzer, an AMC member since college, was the mastermind behind “Deathslog 2011.” Last year, when Switzer’s oldest son, Liam, was seven years old, they planned a night at Greenleaf Hut with another father and seven-year-old, Derek and Jett Rosner. The first morning of that hike, the hikers woke to a downpour. Switzer thought, “That’s it. We’re done.” But the boys responded to the rain by saying, “Guess we’re wearing our raincoats.” The day cleared, and fathers and sons made such good time that they ate lunch on the summit of Lafayette and were back to the hut by noon. “The kids ate it up,” says Switzer. 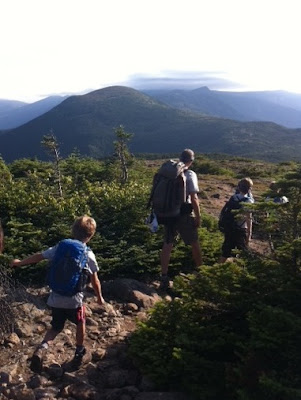 Over the winter, Switzer planned another hike, this time in the Presidential Range, extending invitations to other fathers and sons where they lived in West Hartford, Connecticut. A core group of four fathers and four sons emerged. But when Switzer went to make hut reservations in April, he discovered that there was no combination of summer weekends that would allow the group to hike their planned route from Lakes of the Clouds to Madison. There was, however, some room at Mizpah Hut.

Switzer did some quick math: The new route would require them to cover 12 miles on Saturday alone. He remembered how bored Liam and Jett had gotten hanging out at Greenleaf Hut the previous summer and how they’d hiked back to the top of Lafayette that afternoon and down again, just for something to do. He factored in that the boys would be one year older in 2011. Then he made the reservations.

“I knew it would be a slog,” he says. None of the other father-son pairs — Derek and Jett Rosner, Ken and Cole Berko, Doug and Jack Lubin — backed out. No doubt it helped that the four boys knew each other through competing in mini-triathlons. Still, Switzer and the other fathers understood that the hike — not yet called the Deathslog — would require careful preparation. They told the boys, “You’ve gotta be tough. You’re going to wear a pack, you’re going to be hiking uphill. I have to know you can do this, and do it in a reasonable time.”

They organized several spring hikes, including a 12-miler along the Metacomet Trail in Connecticut. To make the hike more challenging, they ran the flat sections, covering the distance in 4½ hours. Switzer held planning sessions and a pre-hike barbeque. On his own, he logged onto the White Mountain Guide Online and fiddled around with a map of their route. When the right weekend in August came around, he stuffed an extra sack into the bottom of his pack. 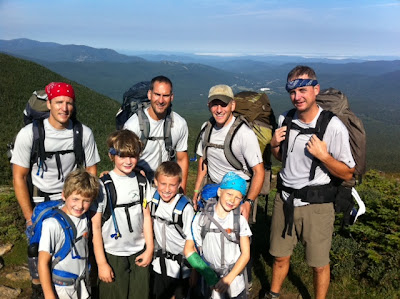 The T-shirts came out of the pack at breakfast on Saturday morning. By 8 a.m., the group had left Mizpah behind. For the next 12 miles, they’d follow the spine of the Presidential Range over at least a half-dozen summits, including Mount Washington. It quickly became obvious that even their training didn’t quite prepare them for the rocky and uneven terrain. “I’ve planned a lot of trips,” Switzer says, “and walked a lot of ridgelines. But this was unlike any ridgeline I’d ever been on.”

The group stayed close together over the first summits, Pierce, Eisenhower, and Monroe, under clear skies. The weather continued to hold, but as the father-son pairs tackled the massive flanks of Mount Washington, they began to spread out. The “no crying” rule began to be honored more in the breach.

Scott and Liam Switzer climbed Clay after Mount Washington, then imposing Jefferson. Liam had been hiking all day with a cast on his right, dominant arm, the result of a fall from monkey bars. “He had to learn to lean with his left arm,” Switzer says. Scrambling up the rocky ridgeline, sometimes the eight-year-old would bang his cast against a rock: “That hurt.” 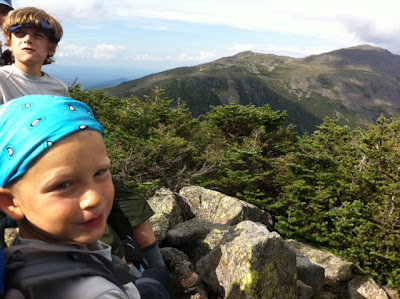 Eventually only Mount Adams stood between the Switzers and Madison Spring Hut. Up ahead, the Rosners took the route over the summit. Scott Switzer looked at his son and made a different call. “I didn’t care about that pile of rocks that was 400 feet higher than where we were,” Switzer remembers. “I just thought, ‘My son will lose his mind if we try that.’”

The final mile and a half traversing Adams to the hut was hard enough. Liam was ready to quit, mad at his dad and hurting. Switzer shared some “raw knowledge” with his son: “You can sit down right here,” he told Liam, “but your body’s got to take you to that hut.”

Ken and Cole Berko welcomed the Switzers to Madison. The first arrivers had worked with the hut croo to save dinner for the rest of the Deathsloggers. Once Liam had collected “about four loaves of fresh bread, an entire pot of lentil soup,” turkey and all the fixings, plus a foot massage, his mood improved. And when the boys saw their beds in Madison’s loft bunkroom, Switzer says, “all was forgotten.” The next morning, all four were ready to hike up Mount Madison and down to Pinkham — and even said they wanted to do the Deathslog again.

Switzer, however, is promising no slog next year. “I’m thinking of taking four days, maybe even a week, to go from Zealand to Greenleaf,” he says. “This year, we had to keep moving. I’d like to make more time for lingering.”

I wonder what the T-shirt will say for that one.

– … about the Metacomet Trail