Dos and Dont’s of Bicycle Safety for Children and Families 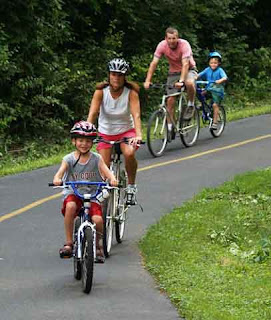 May, the merry month of flowers and warm days and lengthening daylight, is National Bike Month. With summer just around the corner, it’s a great time to think about bike safety for children.

Tom Ebersold leads about 30 bike trips a year for AMC’s Connecticut Chapter, several of them geared for families with children. He also helped run a cycling camp for children in New York. Ebersold offers the following bike safety tips, along with supporting information from the American Academy of Pediatrics and the advocacy group Safe Kids.

Fit the bicycle to the child. Children should be able to sit on the seat of a bicycle, with hands on the handlebars, and place the balls of both feet on the ground. “A bicycle that is too large for the child is unsafe,” Ebersold says. He recommends erring on the side of buying too small a bike—it’s easy to raise the seat, or even buy a longer seat post.

Use an age-appropriate brake system. First bicycles for young children should be equipped with foot brakes. In young children, hand muscles and coordination aren’t developed enough to control hand brakes. Older children should be taught how to use hand brakes. Ebersold says, “Some beginners are afraid to use the front brake because they’re afraid of locking the front wheel and getting thrown over the handlebars. But if the child uses just the back brake, the bike doesn’t stop well and the back wheel can skid out.”

Wear a helmet. Wearing a helmet can reduce the risk of head injury by as much as 85 percent, according to research 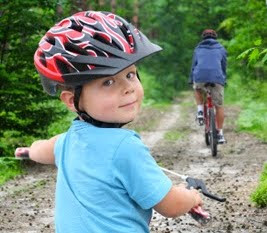 by Safe Kids USA. “Too often I see kids riding without helmets,” Ebersold says—”and even when they are wearing helmets, they’re rarely wearing them properly.” Kids, he’s noticed, tend to tip the helmets back on the head, which means the forehead is exposed and unprotected. “A properly worn helmet needs to sit level on the head,” he says. “The straps should be snug enough that if the child opens his mouth, the helmet straps pull down on the head.”

Parental role modeling makes a big difference in whether children wear bike helmets. In another Safe Kids study, 90 percent of children who didn’t wear bike helmets had parents who never wore bike helmets. Children whose parents always wore helmets and also set clear expectations for helmet use, not surprisingly, were far more likely to wear helmets—and to influence their friends to wear them, too.

Young adolescents may require additional reinforcement for wearing helmets. It can be helpful to remind them that increasing skills mean increasing risks.

Different helmets fit differently, so it’s important to bring a child along to the store when purchasing a helmet. Bike shop employees should help fit the helmet. They can also help reinforce the importance of wearing the helmet each time the child is on a bicycle.

Practice bike skills with children. Ebersold suggests practicing bike skills with children on a wide, quiet street or in a parking lot. “While rail trails, for instance, are a natural draw for families,” he says, “they may not be as safe as they appear. A heavily congested trail can be difficult to navigate, in part because children are impulsive and will do unpredictable things like making abrupt U-turns.” Kids should have lots of space around them when first practicing their skills. 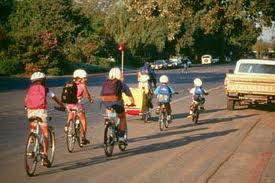 he American Academy of Pediatrics (AAP) reports that almost a quarter of bicycle-car collisions occurred while bicyclists were riding against traffic. Children shouldn’t ride in streets until they’re able to use a simplified hand-signal system, right arm for a right turn and left arm for a left turn. According to AAP, accidents involving older children often occur when riders fail to signal their intentions to motorists.

Keep in mind that our streets, even in residential areas, have more cars on them, and people are driving faster and more distractedly on them, than when today’s parents were children.

Don’t let children ride at night. Riding a bicycle at night requires special skills and special equipment. Children are also not developmentally able to assess the risks involved with nighttime riding. AAP urges parents never to allow children to ride at dusk or after dark.

Match safety practices and information to the child’s development. Young children just learning to ride tricycles and bicycles need constant supervision. Research has shown that in middle childhood and early adolescence, children’s skill levels and risk-taking behavior increase, but crucial other skills that help them avoid injury lag behind. At early ages, eye-hand coordination is not yet fu 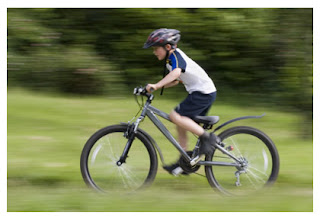 lly developed, and children don’t recognize obstacles as quickly as adults do, or avoid those obstacles as quickly. (Young riders tend to avoid obstacles in two discrete steps—recognizing the obstacle and then executing avoidance action—while older teens and adults integrate the two steps.) Young riders also lack the ability to scan visually crowded space, as in a street with parked cars, moving traffic, and pedestrians. Needless to say, this is an important skill to have as a cyclist.

Riding bicycles around the neighborhood or all over town is a time-honored activity of American childhood. By following just a few basic procedures, it can be a safe one, as well.