Early-season family hikes in the Catskills and Hudson Valley 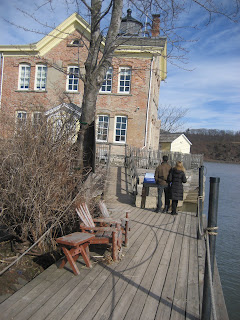 I’ve asked the authors of several new AMC guidebooks to share their suggestions for first-of-the-year family hikes. We started with spring hikes in the White Mountains and around Boston and Cape Cod. In this third post, we travel to New York. Our guide is Peter Kick, author of AMC’s Best Day Hikes in the Catskills and Hudson Valley, now available in an expanded second edition.

The five hikes selected by Kick take children to a trailside zoo, fire tower, cranberry bogs, lighthouse, and even a meteor crater. 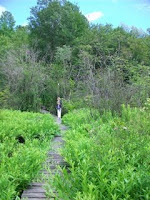 Hessian Lake and Fort Montgomery, Fort Montgomery. “This easy hike winds through a park and a zoo, around a lake, and through a Revolutionary War site adjacent to the Hudson River,” says Kick in his introduction to the trip. The Bear Mountain Trailside Zoo houses only animals native to New York State, such as bear, bobcat, beaver, and otter, that have been found injured or abandoned. The zoo also includes four museums: Reptile and Amphibian House, home to a variety of turtles, snakes, frogs, toads, salamanders and skinks; Nature Study Museum, created by the Museum of Natural History to teach children about animal identification; Geology Museum, where visitors learn about the geology of the Hudson Highlands; and History Museum, which explores local Native American and early settler culture. Kick recommends hiking the popular 3.25-mile trail before Bear Mountain State Park opens in June, when trails become much more crowded and parking fees take effect. On the other hand, a summer hike may be just the thing, if children know that a swimming pool, merry-go-round, and picnic area await them.

Thompson Pond and Stissing Mountain, Pine Plains. Kick recommends Thompson Pond as a spring hike with children because of its wildlife — “returning birds, rails, golden eagles, and lots of little bridges with schools of fish underneath” — and also because that hike can easily be combined with a climb to the top of the fire tower on nearby Stissing Mountain. Each hike is about three miles. Be aware that the fire tower has a waist-high enclosure and roof but no windows, so expect to feel the full force of the wind! 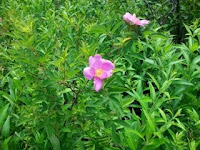 Cranberry Lake Preserve, North White Plains. A “delightful and diverse short walk” near Kenisco Reservoir is an “ideal outing for young children,” says Kick. Cranberry bogs are one of the interesting features in the small preserve’s forest and wetland habitats. In the spring, tulip trees and rhododendrons are in bloom. Kick recommends the family-oriented programs at the preserve’s Nature Center. Nature programs are offered to the public nearly every weekend.

Giant Ledge, Shandaken. “Giant Ledge is my favorite easy hike in the Catskill High Peaks,” Kick says. “It’s good any time of year, and very forgiving for a season opener — a gigantic-feeling hike without the work.” The three-mile hike offers big views, a glacial cirque, and even the site of an ancient meteor impact, 375 million years ago. The circular crater can still be seen on satellite images.

Saugerties Lighthouse, Saugerties. This easy 1.1-mile hike is “an ideal introductory hike” for young children. The Saugerties lighthouse is the only lighthouse in the Hudson Valley that is both occupied and accessible by foot. The brick lighthouse sits at the point of a small peninsula that juts into the Hudson River. The short trail through a 17-acre nature preserve is flat and easy to walk, but surrounded on both sides by “jungly” tidal wetlands. A spur trail leads to a sandy beach. Children can “examine bits of flotsam and jetsam washed ashore with the tides, half hidden in the sands,” writes Kick. “Maybe a message in a bottle will be discovered!” There are picnic tables at the lighthouse, which is now run as a bed and breakfast.