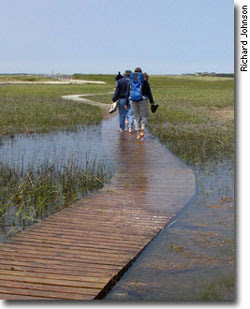 I’ve asked the authors of several new AMC guidebooks to share their suggestions for first-of-the-year family hikes. Robert Buchsbaum began by recommending a few hikes in the southern White Mountains. With this post, we head south, to eastern Massachusetts. Our guides are Michael Tougias and John Burk, co-authors of AMC’s Best Day Hikes near Boston, now available in an expanded second edition.

Hiking in the spring is a wonderful way to watch the natural world come alive. The four hikes selected by Tougias and Burk bring children to different natural environments: salt marshes where migrating shorebirds stop and rest on their way to breeding grounds in the Arctic, river wetlands, even carriage roads and flowering trees for a community that was never built.

Great Meadows Wildlife Refuge, Concord. An easy 1.7-mile loop that travels along two ponds and the floodplain of the Concord River. The open and changing wetland views hold children’s attention, especially as they’re likely to see osprey, geese, blue herons, ducks, and other species of birds. Look for muskrats and their cattail lodges along the shoreline of the freshwater pools next to the trail, John Burk says, and for the painted, spotted, and snapping turtles that share the pool. Bluebirds, woodpeckers, and migratory songbirds are often easily visible in the woods bordering the ponds, along with squirrels, chipmunks, and other familiar woodland creatures. (Be forewarned: Kids may not want to leave the parking lot until they’ve climbed to the top of the observation tower.) The Great Meadows Wildlife Refuge is a short drive from Minute Man National Historic Park and Walden Pond.

Rocky Woods, Medfield. Children can climb a whale (Whale Rock), catch a fish (and throw it back in), or follow a narrow passage through a “mini-canyon” in the large Rocky Woods Trustees of Reservations property. Plan the fun around a picnic — picnic tables and grills are scattered about the shoreline of Chickering Pond.

Wellfleet Bay Wildlife Sanctuary, Cape Cod. John Burk recommends Wellfleet Bay Wildlife Sanctuary in South Wellfleet for its easy trails and diverse — and often quite visible — wildlife. From spring through fall, Burk says, “there are all sorts of crabs, peepers, ducks, herons, cottontail rabbits, shorebirds, and turtles that are easy to see. And the sanctuary has a large butterfly garden.” The trails offer constantly changing views of different habitats, including ponds, forests, beaches, marshes, open grasslands, and mudflats. Many shorebirds use Wellfleet Bay for stopovers during their long spring migrations to their Arctic breeding grounds.

World’s End Reservation, Hingham. World’s End, as the name suggests, is a peninsula that juts out into Boston Harbor. At the end of the nineteenth century, landscape architect Frederick Law Olmsted laid out roads and planted trees for a residential development on World’s End that was never built. Most of the 4.5 miles of trails are on Olmsted’s old carriage roads, now maintained by The Trustees of Reservations and included in the Boston Harbor Islands National Recreation Area. Tougias calls World’s End “an old favorite”: “Kids can walk along the beach looking for driftwood, run through the meadows, see the Boston skyline, and walk on a path through the woods and by a small pond.” In the spring, look for sea ducks and other shorebirds along the rocky shore or walk among the tulip and apple trees in blossom.