Easter on Walden Pond: Looking for Spring with My Toddler Sidekick 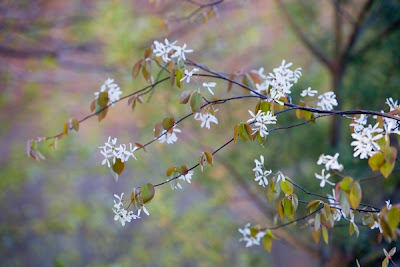 Last Easter, I decided to take my toddler on an adventure. No basket filled with fake grass and chocolate bunnies for her. We would keep the Sabbath Emily Dickinson–style, in the natural world. We would visit Walden Pond.
Going to Walden is not, for us, the pilgrimage it is for many visitors. As a local, I mostly think of Walden Pond as a swimming beach with a short loop hike around the shore, although the history of Henry David Thoreau’s sojourn there always comes to mind when I walk past the replica of his cabin in the parking lot. The trail, just 1.7 miles, circles the kettle-hole pond so gently that I walked the full loop the afternoon before my daughter was born, carrying the extra 30 pounds that came with pregnancy. That autumn day, the midwives had wanted to induce labor—my baby was nearly a week past due—but instead I asked for 24 hours and headed to Concord with my husband.
I don’t dwell on this history with my girl (let’s call her Hazel, after her eyes). She is 2 now and plays pregnant by stuffing a teddy bear in her shirt.
To prepare for our outing, I pack some of my mother-in-law’s raisin-studded Easter bread, water bottles, and a diaper bag. Meanwhile, my husband pulls out his bike shorts and jersey. He’s planning to cycle on the bike path to Bedford, Massachusetts, about twelve miles away, as I drive from our apartment in Somerville to Concord, a similar distance in the same direction. It’s our family’s parallel of the children’s book Henry Hikes to Fitchburg. In that tale, based on a real remark by Thoreau, a bear named Henry enjoys a long day’s walk through fields and streams, swimming and sketching on his way to Fitchburg, while his friend works in town to earn the money for train fare to meet him. Henry gets there a little later, but only because he stops to pick berries. Hazel doesn’t seem to understand the bigger message of the story yet, but she likes the scene where the honeybees chase Henry and he dives into a pond, his hat flying.
My husband, like Henry, will power his own journey today, while Hazel and I will take the faster car, which like the train of the storybook is more expensive and more damaging to the environment. As a parent, I’m not thinking about self-reliance, though, or even carbon footprints, as much as I’m working around our preschooler’s schedule. The long ride to Concord and back in a bike trailer wouldn’t be much fun for Hazel, and she’d likely fall asleep, which would ruin naptime. The trip is also about my desire: The small parks in our densely packed urban neighborhood, while terrific for close-to-home outings on weekdays, don’t fulfill my yearning for more time in the woods. So into the car I go with Hazel most weekends, trying to get away from urban congestion by the quickest method possible. Sometimes my husband travels with us in the car, his bicycle on top, and then rides the rural roads; sometimes he bikes from home and meets us in the western suburbs. But often, we travel in parallel loops, only to meet again back home for lunch, as we will today. 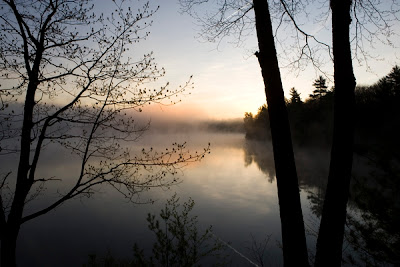 I chose Walden because I’ve been reading about spring wildflowers and climate change. In response to warming temperatures, nonnative and invasive flowers are blooming earlier and crowding out less adaptable native plants in Concord, according to research that draws in part on Thoreau’s meticulous observations from more than 150 years ago. The mean annual temperature in the town has increased by more than 4 degrees Fahrenheit since his day, causing some plants to shift their flowering time by as much as three weeks. The head start helps newcomers like purple loosestrife thrive, while beloved species like lilies, orchids, and dogwoods have been hit hard. I grew up in a suburb of Albany, New York, where flowers were simply divided between the desirable (like the tulips blooming in massive swaths in an annual city festival) and the undesirable (the dandelions in our front lawn), so I’ve never had a strong handle on what is native to our region. But I’ve been learning about red trillium, bloodroot, and trout lily, and I’m hungry to know more.
When I park near the Walden Pond visitor center, I’m disappointed to see a tulip in front (native range from southern Europe east to the northwestern parts of China, I now know). But I stuff a simple flower checklist from the Appalachian Mountain Club’s Flower Watch program into my pack and remember to wait as Hazel clambers out of her car seat herself. (“I want to do it,” she says indignantly, whenever I forget and start to lift her.) Holding hands, we cross the street and hike down past the empty beach to the path at the water’s edge. Two people in a shiny silver boat, their fishing lines dangling, drift on the pond, which didn’t have many fish in Thoreau’s day and is now stocked annually. From the looks of them, I’d guess these two won’t care if they don’t catch a thing. The morning is cool, unlike the record-breaking heat the month before. Two swimmers in black wetsuits paddle toward the opposite shore, their voices carrying aimlessly over the water toward us. Hazel briefly lets go of my hand, taking the lead. 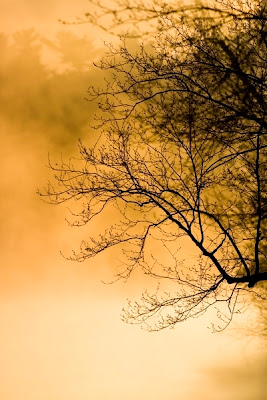 Flower Watch gathers reports from hikers and other amateurs about blooming times of native plants in the Northeast, which can provide insights into larger changes in our environment over time. This morning, I don’t have ambitions to provide such official data. Unlike Thoreau, I have no ambitions to record anything. I am hoping to spot some flowers, certainly. But my bottom-line goal is simpler: to get my daughter and myself down the trail. Luck does not seem to be with me. A swarm of mosquitoes greets us almost as soon as we hit the path, and Hazel turns and buries her head in my legs, sticking like a burr.
“Let’s put the pinecones to bed,” I suggest in my cheeriest voice, surreptitiously swatting. “Do you remember the stone wall?”
I manage to get her to a part of the path we loved last summer, where stone niches in a wall serve as bunk beds for whatever we pick up. The stratagem works, for a while. But the hungry mosquitoes, out surprisingly early because of the warm winter, are distracting both of us.
“Hold me,” Hazel wails, reaching to be picked up. I rue having left the child carrier, and the insect repellent, at home.
“Let’s put your mittens on,” I suggest, and she submits, just to keep the bugs off her hands.
I try running. I try talking about the swimmers, the boaters. I look desperately for flowers. Where are they? Are they already gone because of the warm winter? I spot something that looks just like a shriveled dandelion, but I don’t stop to make a better identification. At last, I lift my daughter in my arms. She weighs only about 30 pounds, I tell myself. I’ve done that before. I walk quickly, trying to leave the insects behind.
Something about the moment reminds me of my own parents, paddling a canoe across an Adirondack lake in a rainstorm, trying to make shore before the thunder closed in. My brother and I and our camping gear were all in that one canoe, and the waves lapped high on the gunwales. Our parents got quiet and moved fast, the way parents do in the face of danger, trying to seem calm.
Of course, the Walden Pond mosquitoes are just a nuisance, but I’m being stubborn about not turning back. Just as I think my arms may give out, we make it to the bridge before the clearing where Thoreau’s cabin once stood. The bugs seem to be gone. When we get to the cairn of rocks that visitors have left at the site, Hazel happily pulls her mittens off and devours her Easter bread.
A tourist stops to snap photos. “I remember it all from high school,” he remarks, not waiting for a response. 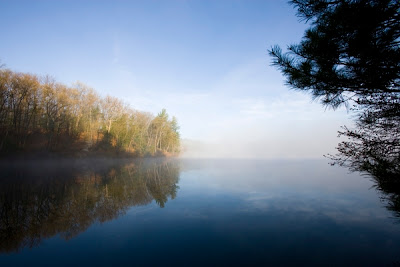 “I want more,” Hazel announces. I give her milk.
She and I walk into the space that was once the cabin, which is about the size of her bedroom. We talk about where the fireplace and chimney were, and how Thoreau chose a good spot far enough from the water to avoid the bugs. I describe how he used to clean his house by moving all the furniture out, sweeping the floor, and moving everything back in. How difficult that would be for me and my husband, though we imagine we live simply. Some day perhaps Hazel will challenge us to hew closer to Thoreau’s ideals. Some day perhaps she will understand how coming here instead of checking into the hospital when she was not quite ready to be born reflected a streak of independent thinking encouraged by Thoreau. Perhaps she will want to debate the merits of “natural” childbirth (which turned out well for us) or civil disobedience, or she will ask me about transcendentalism. But now she is impatient. “Let’s go,” she says, tugging my hand.
As we cross the bridge heading back, Hazel spots a ridge trail that is new to both of us and suggests we take it. Perhaps her love of exploring draws her there, but I think she has learned already that being up on the hill will shield us from the mosquitoes. In any case, it does. It also gives us a great view of a turtle sunning on a log some 40 feet below and, later, of a woodpecker tapping one of the trees. My earlier feeling of annoyed perseverance dissipates. I relax into something like reverence, or maybe just reverie. Perhaps this is what Dickinson means when she writes that instead of getting to heaven at last, she favors going all along. My flower identification guide stays in my backpack. The only flowers I spot near the trail seem to have already completed their blooming cycle, even though it’s early April.
“Do you see that one?” I ask my daughter, squatting down near a tiny shriveled bloom. “It’s dried up.”
“It’s like an apple ring,” she declares.
I can’t identify the flower, but that doesn’t bother me. I haven’t advanced science one jot this morning, but it sure beat searching for trinkets in plastic eggs. “What shall we tell Dad about our trip?” I ask Hazel as we approach the car.
“There were a lot of bugs,” she says. “Can you sit in the back with me?”

Great Kids, Great Outdoors is an Appalachian Mountain Club blog written by Heather Stephenson. This essay originally appeared under a different title in the Winter/Spring 2013 issue of Appalachia.