To Paddle and Protect: 4 Endangered Rivers on the East Coast 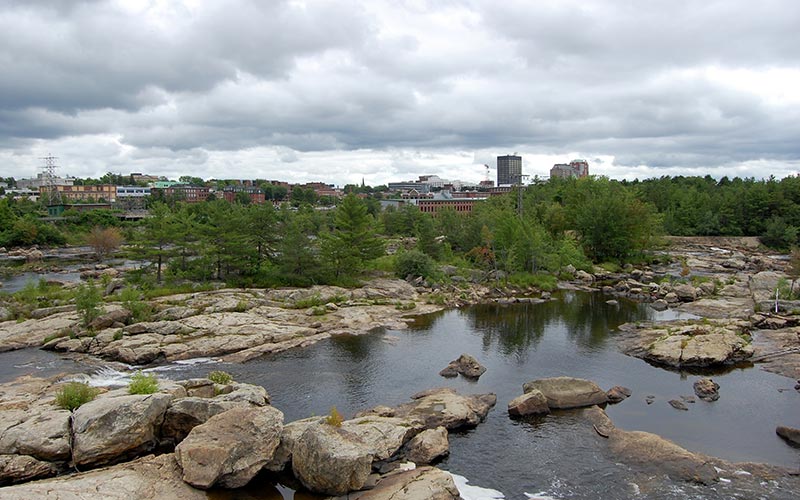 PSNH on Flickr/Creative Commons 2.0For now, at least, the Merrimack, one of the Northeast’s most endangered rivers, provides great paddling.

American Rivers, a waterway protection organization, publishes an annual ranking of America’s most endangered waterways. Threats include poor environmental protection, damming, deforestation, and pollution, yet the rivers on this list still feature spectacular potential for canoeing and kayaking. These four endangered rivers, from the last three years’ lists, are each worth exploring:

1. MERRIMACK RIVER
Flowing from the Pemigewasset Wilderness in New Hampshire to the mouth of the Atlantic in Newburyport, Mass., the Merrimack traces a path from the Northern Forest through the birthplace of the industrial revolution in Lowell, Mass. Although it provides drinking water to more than 600,000 people, the river is critically endangered by polluted urban runoff and forest loss throughout its watershed. Paddle the two sections below to see how the river and surrounding towns coexist.

Paddle It: Amoskeag Falls | Manchester, N.H.
Located upriver from Manchester’s historic, brick-lined mill district, Amoskeag Falls is a good place to paddle if you’re looking for a new perspective of the city. A put-in near exit 6 off Interstate 293 provides easy access. Notice the fish ladder of the Amoskeag hydroelectric dam before paddling downstream, away from the falls. The ladder helps migrating fish like Atlantic salmon bypass the dam to return upriver and breed. Use caution navigating the rocks at the base of the falls as you explore the river’s small islands, then head downstream to the heart of Manchester. Nineteenth-century mill buildings crowd the shore here, a remnant of the river’s industrial past. This section can have Class III whitewater during spring and high water, so proceed with caution. For a convenient take-out, head to Stark Landing, located behind the city’s minor league baseball stadium, home of the Fisher Cats.
DISTANCE: 5.3 miles
INFO: New Hampshire Boating Public Access Map

Paddle It: Riverside Park to Cashman Park | Haverhill to Newburyport, Mass.
This stretch follows the Merrimack near its tree-lined southern terminus, where the river completes its journey to the Atlantic Ocean. Starting from the boat ramp in Haverhill’s Riverside Park, enjoy a leisurely paddle along the edge of the river, keeping an eye out for osprey. There are several bridges on this route, all of which have high clearance. In Newburyport, take out at Cashman Park on the southerly side of the river just before the marina. More advanced paddlers may continue downriver toward Newburyport but should stick close to the shore to avoid motorboat traffic. Time this paddle with the outgoing tide to avoid fighting the current, and be aware that even at low tide waves can be high and choppy.
DISTANCE: 13 miles
INFO: Haverhill Parks and Recreation; Cashman Park

2. SUSQUEHANNA RIVER
The longest river on the East Coast, the 464-mile Susquehanna drains 27,000 square miles of watershed, accounts for half of the fresh water in the Chesapeake Bay, and supplies drinking water for 6 million people. Despite its importance to human, plant, and animal communities, the river faces numerous threats from Maryland’s Conowingo Hydroelectric Dam, which endangers wildlife migration, water flow, and water quality.

Paddle It: Conowingo Reservoir | Darlington, Md.
Both the Conowingo Reservoir and Lake Aldred (below) were formed by a series of four dams on the border of Pennsylvania and Maryland. Paddling these man-made lakes along the Susquehanna offers an up-close look at the effects of damming the river. To explore the reservoir, put in and take out at Muddy Creek Boat Launch, off River Road. As you paddle around the rocky islands that dot the reservoir, notice the scarring on the rock faces from ancient glaciers. Resident king fishers, eagles, and great white egrets make this area a bird-watching paradise.
DISTANCE: 14 miles of navigable water
INFO: Quiet Water New Jersey and Eastern Pennsylvania (AMC Books)

Paddle It: Lake Aldred | Pequea, Pa.
Lake Aldred sees more powerboat traffic than nearby Conowingo Reservoir, but it’s worth finding a quiet time to paddle here to view the petroglyphs on the lake’s Indian Rock Island and Little Indian Rock. Using the boat launch off of River Hill Road, paddle upstream to the cluster of islands just below Safe Harbor Dam. Use GPS or keep a sharp eye out to find the petroglyphs and remember to stay a safe distance away to avoid damaging these beautiful American Indian carvings. (GPS coordinates are 39° 55′ 15” N, 76° 23′ 5” W.) Stop for lunch on the sandy beaches of Weise Island before completing your return trip.
DISTANCE: 6 to 7 miles of navigable water
INFO: Quiet Water New Jersey and Eastern Pennsylvania (AMC Books)

3. ST. LAWRENCE RIVER
The St. Lawrence connects the Atlantic Ocean and the Great Lakes via Lake Ontario, forming a portion of the U.S.–Canada border. Outdated dam practices and poor water-level regulation at the Moses-Saunders Hydropower Dam in Massena, N.Y., currently endanger the river. As a result, the entire length of the waterway has suffered biodiversity loss, from endangered black terns to northern pike. The Thousand Islands region in upstate New York presents many opportunities for paddlers of all skills levels to explore this mighty but threatened river.

4. POTOMAC RIVER
Originating in the Appalachian Mountains of West Virginia, the Potomac flows into the Atlantic via the Chesapeake Bay. Vital to the health of the bay, the river is a historical travel route for people and migratory fish alike. Pollution of the Potomac inspired the Clean Water Act of 1972. Although the river is much cleaner today, it remains endangered by polluted runoff from urban areas.

Paddle It: Paw Paw Bends | Paw Paw, W.Va., to Oldtown, Md.
Part of the Potomac Heritage National Scenic Trail, this winding section of river on the West Virginia–Maryland border is among the most secluded spots on the Potomac. Spend a day paddling through the scenic Green Ridge State Forest or extend your journey into several days by staying at some of the numerous campsites along this route. Begin at the Paw Paw Tunnel, a failed attempt to connect the river to the nearby C&O Canal, and explore the twists and turns nicknamed “the bends.” Lining the shore are the namesake pawpaw trees that, in late summer, produce the largest edible fruit indigenous to the United States. Take out at Bonds Landing, in Oldtown, Md., where camping is available by reservation.
DISTANCE: 11 miles
INFO: Potomac Heritage National Scenic Trail