Family Hikes In and Around Washington, D.C.: the consummate outsiders’ guide 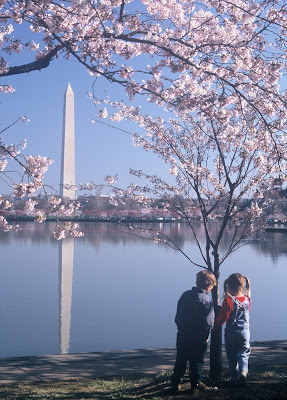 The newest guide in AMC’s Best Day Hikes series gives fresh meaning to the phrase “outside the beltway.” Each year, millions of families travel to Washington, D.C., to see the nation’s museums and monuments. AMC’s Best Day Hikes near Washington, D.C. divulges insiders’ secrets to getting outside the famous walls of our nation’s capital—and some surprises for families who already know the city.

Who would have known, for instance, that a walk around the National Mall passes no fewer than a dozen public gardens, including two butterfly gardens and a fragrant Victorian courtyard where children can smell nature as well as see it? Beth Homicz, co-author of the guide with Stephen Mauro, points out that spending time outdoors in metropolitan D.C. doesn’t take away from learning about the nation’s culture and history but can actually add to it. She recommends four family hikes in particular that bring the nation’s history outdoors.

1. The National Mall, Washington, D.C.
The National Mall is the geographical heart of the nation’s capital, Homicz says, and also the heart of its tourist area, receiving more than 24 million visitors a year. It’s not necessary to hike the mall’s full 2.25-mile length, because any of the green spaces listed below offers a respite from crowds and sun.

Butterfly Habitat Garden at the Smithsonian’s Museum of Natural History—four different landscapes attract many of the D.C. area’s 80 butterfly species

Hirshhorn Sculpture Garden A changing collection of outdoor sculptures, flowering trees, and a fountain in a sunken garden

Native landscape gardens at the National Museum of the American Indian

Ripley Garden A Victorian “fragrant garden” in a curving design

U.S. Botanic Gardens Enjoy desert and tropical plants inside and butterfly and water gardens outside

2. National Arboretum, Washington, D.C.
A short drive from the Capitol, the National Arboretum is a “wonderful green space inside the city,” Homicz says, with several features of special interest to families. A tram takes visitors on a half-hour tour of the grounds. Picnic tables in the National Grove of State Trees make it a pleasant place for an outdoor meal. Children can feed Japanese koi in an aquatic garden. And the Arboretum’s rows of blooming cherry trees in the spring are more peaceful than those along the National Mall.

Homicz urges visitors not to miss the National Bonsai and Penjing Museum inside the arboretum. It contains a nearly 400-year-old white pine bonsai that survived the atomic blast at Hiroshima and was given by Japan to the U.S. in 1976 as a bicentennial gift—”an object lesson in peace and reconciliation,” Homicz says. The arboretum also houses the Washington Youth Garden, more than 100 small plots tended by area elementary-school students, inside a colorful flower border.

3. Prince William Forest Park, Quantico, Virginia
The largest forested area in the D.C. region contains 37 miles of hiking trails, 12 miles of popular Scenic Drive biking, a piece of petrified wood more than 150 million years old, and several connections to American history. Among those connections: a road used by General George Washington during the Revolutionary War; Depression-era summer camps for city children that were segregated by race; cabins built by the Civilian Conservation Corps (CCC). During WWII, members of the newly formed Office of Strategic Services (OSS) trained in the park’s dense forests, practicing their spy craft while living in CCC cabins. The park rents some of the same cabins used by the OSS and maintains two campgrounds.

4. Manassas National Battlefield Park, Manassas, Virginia
The first major land battle of the Civil War occurred here in the summer of 1861, 150 years ago. Soldiers from the newly formed Union and Confederate armies fought in the open fields and meadows around meandering Bull Run stream on a steamy July day. Both armies were inexperienced, but after a full day of fighting, a Union army withdrawal turned into a full-scale retreat. Some of the fleeing soldiers ran into the carriages of congressmen who had driven out to watch what they had expected to be a quick and easy win by the Union army. A second battle of Manassas a year later also ended in defeat on the federal side. Children under 16 are admitted free to the park. Tours, films, exhibits, and picnic areas easily make this a full-day visit. Special sesquicentennial events will be held at the park July 21 through 24.

Learn more
Homicz, who worked for many years as a licensed Washington, D.C., tour guide, offers the following suggestions for visitors:

Be prepared for changeable weather. People often visit Washington, D.C., in the springtime to see the cherry trees. They expect the weather will be soft and warm. But in early April, the temperature can just as easily be 20 degrees, or 80.” In every season, Homicz warns, “come prepared for anything in terms of weather.

Carry extra water. It can be easy for visitors to Washington, D.C., who aren’t used to oppressive humidity and stifling heat to succumb to heat exhaustion or heat stroke in the warmer months. In such conditions, Homicz says, “the body’s self-cooling functions can be severely challenged.” Visitors should stay well hydrated, though Homicz cautions that extra cooling may be required. At least many of the capital’s buildings are open to the public and air-conditioned.

Take security into account. “The visitor experience in federal buildings may not be what you may remember,” Homicz says. Museums, monuments, and the capital’s other buildings have varying, and ever-changing, levels of security inspections. Some buildings don’t allow any photography or chewing gum; others prohibit strollers or bottled water. Homicz recommends checking websites ahead of time to learn what restrictions are currently in effect.