Filter Water by Drinking through a Straw—The LifeStraw Water Filter

Simply stick one end in the water, the other in your mouth, and drink. As you suck water through the straw, it passes through an internal filter that removes the most common aquatic backcountry baddies—giardia and cryptosporidium—as well as suspended sediment and other potential water-borne illnesses.

Developed by Vestergaard Frandsen, a Europe-based company that specializes in emergency response and disease control products, the 2.1-ounce LifeStraw is designed to filter up to 1,000 liters of water and remove water-borne bacteria, cysts, and protozoan parasites that can cause illness. It has been widely deployed in areas around the world where lack of access to clean drinking water creates significant public health risks.

LifeStraw removes objects from the water down to 0.2 microns using a physical internal filter composed of “hollow-fiber membranes.” Think of a collection of long, very narrow tubes, with an even tinier pores on their sides. Water is drawn up the tubes as you suck on the straw, and is then pulled through the tiny pores on the sides, leaving the contaminants behind. To keep it from getting clogged up, you blow back down the straw when you’re done drinking.

How quickly can you drink through a LifeStraw? And how effectively does it remove sediment (reduce turbidity) and water-borne cysts and bacteria, like e. coli, giardia, and crypto? (Note that, like all physical filters, LifeStraw does not eliminate viruses; additional chemical treatment is required in areas where that may be a concern, though virtually never in the backcountry). To answer these questions, the company lists several independent scientific studies on its web site, including one from the University of Arizona Department of Soil, Water, and Environmental Science. 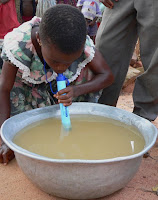 Key findings of the University of Arizona study: Yes, LifeStraw meets the EPA requirements for removing bacteria and protozoan parasites. And it listed some specific numbers for how quickly water passes through the straw over time. From the study:

Flow-rates varied as follows in average:

So the flow rate clearly diminishes over time and use. And, even at peak rate, it would take you nearly four minutes to drink a liter of water, so it’s not the fastest way to chug water. Then again, the overall time is not much more (potentially even less) of the time required to use a pump filter instead.

LifeStraw sells for $19.95 on Amazon, where it has garnered nearly universal positive reviews (4.7 out of 5 stars from 234 users at the time of this post). You can also find LifeStraw at a handful of outdoor retailers and survival shops; here’s the complete list.