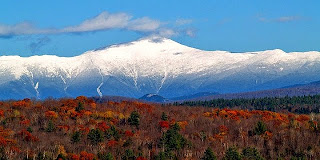 The first snow of the season arrived in a flurry earlier this week, here and around northern New England. The higher peaks had already received dustings, of course, and Mount Washington is nestled once again under the first layer of what will become its heavy winter blanket of snow.

Even more modest changes in elevation make a difference when it comes to snow. Our house sits at around 1,500 feet; the kids’ school, not far from the Connecticut River, is a thousand feet lower. “We have snow on the ground at home,” I told the kids when I picked them up on Thursday afternoon in a freezing rain. My news thrilled Virgil. He bounced up and down in the back seat as we drove back home, listing everything he wanted to do in the first snow of the year: roll it into snowballs, carve it into snow sculptures, pour warm syrup over it for “sugar on snow,” build a snow fort, have a snowball fight, get out his snowboard and practice… “We may not have enough snow for all that, not this first storm,” I cautioned him. “But we’ll get to do all that, I promise, before the winter is over.” 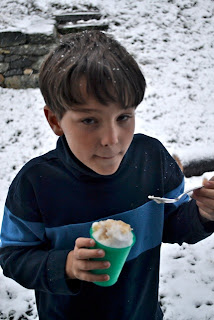 Ursula, on the other hand, put her hands over her ears and moaned. “It can’t snow before Halloween,” she wailed. “It’s just not right!” She loves winter, and will spend hours tromping around in the snow. But the October snow offended her sense of the proper progression of the seasons. It’s also possible that an early Halloween experience — as a toddler princess who insisted on wearing pink plastic sandals in three inches of slushy snow — helped form her distaste for foliage-season snow.

When we got home, Virgil put on rain boots and pulled open the mitten and hat drawer for the first time in months and then turned around and went right back outside. A while later, he brought me a perfectly round snowball. “This is great snow!” he exclaimed. With a little maple syrup added, the snowball became a sweet treat. Ursula stuck to her principles, too, refusing to go out in the new snow before the plastic bins with our winter boots and coats were in from the barn.

I thought I could reassure her that the snow would be gone before Halloween. But Jim whispered that an even bigger storm was headed our way over the weekend. I hope monsters wear snow boots….