Every year on Christmas, the North American Aerospace Defense Command (NORAD) tracks Santa Claus with its cutting-edge surveillance technology and then shares this crucial information in real-time via the NORAD Santa Tracker.

You can follow his location via a constantly updated map, keep track of the number of gifts delivered (2.35 billion and counting as I write this), and get clued in to his next likely location based on his current flight trajectory. NORAD also places Santa Cams—”ultra-cool, high-tech, high-speed digital cameras”—at many locations around the world and then posts the videos once he’s been captured on film.

Good stuff, but not nearly as fascinating as some of the remarkable information available from the About Santa FAQ page on the site. Here are the Top 5 things you probably never knew about Santa, courtesy of NORAD’s exhaustive tracking, surveillance, and background research: 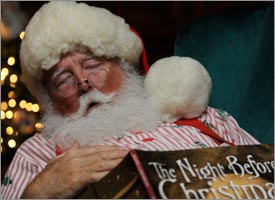 How Santa travels the entire world in only 24 hours:
“NORAD intelligence reports indicate that Santa does not experience time the way we do. His trip seems to take 24 hours to us, but to Santa it might last days, weeks or even months. Santa would not want to rush the important job of delivering presents to children and spreading joy to everyone, so the only logical conclusion is that Santa somehow functions within his own time-space continuum.”

Santa’s height and weight (before cookies):
“Based on flight profile data gathered from over 50 years of NORAD’s radar and satellite tracking, NORAD concludes that Santa probably stands about 5 feet 7 inches tall and weighs approximately 260 pounds (before cookies).”

The technical details about Santa’s sleigh, which NORAD has intensively studied for more than 50 years:

What Santa does when he’s intercepted by NORAD fighter jets:
“Over the past 50 years, our fighter jets (F-16s, F-15s, F-22s and CF-18s) have intercepted Santa many, many times. When the jets intercept Santa, they tip their wings to say, “Hello Santa! – NORAD is tracking you again this year!” Santa always waves. He loves to see the pilots!”

How Santa gets down chimneys…Actually, even NORAD hasn’t been able to figure this one out!
“Although NORAD has different hypotheses and theories as to how Santa actually gets down the chimneys, we don’t have definitive information to explain the magical phenomenon.”