Fledging in the graduation season 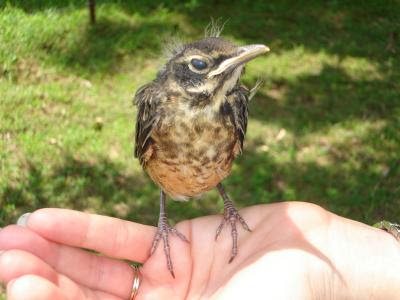 I looked it up in the dictionary: Fledging means taking care of a young bird until its feathers and wing muscles are sufficiently developed for flight. Add an “l” and you get the name for a young bird whose wing feathers have recently come in. Fledglings often remain under the care of their parents, though, even after they’ve learned to fly.

I’ve been thinking about both words lately, in their several forms — verb, noun, and adjective — and in uses both scientific and metaphoric. It is, after all, the fledging season, when young of the year (and not only those that grow feathers) take first steps.

Sometimes there’s not much warning. The baby robins we’ve observed over the past couple of weeks from our kitchen window opened their eyes late last week. On Saturday morning, they were busy pulling out fluffy white tufts with their small yellow beaks — fledging feathers, no longer necessary now that their flight feathers were coming in — and jostling for position in a nest that suddenly seemed much too small for the four of them. One bold one even stepped out of the nest and onto the slippery slope of the upright toboggan that’s been their nest platform. It tottered there for a few seconds and then scurried back into the nest.

The next morning, standing at the sink, I automatically glanced over at the nest. Empty. Later, we walked around the back yard, looking for clues. Ursula found a snake skin on top of the rock wall and remembered coming upon a large snake sunning itself and watching it slither back down between the boulders. Snakes eat birds’ eggs and young birds; so do squirrels, blue jays, and crows. A stray cat might have clawed its way up the toboggan, though that seemed less likely. More likely was that the 2-week-old birds were ready to leave the nest, and did.

Assuming the young birds made it safely from nest to ground, they’ll spend several more weeks learning the ways of the robin world from their parents. The adults will teach them how to feed themselves, where to perch safely during the day and at night, and what dangers to avoid.

I discovered the empty nest the day after our nephew graduated from high school. He graduated on one day; the next morning, he caught the first flight to the west coast. By now he’s registered for college classes and flown on to Alaska, also alone, to begin a summer job at a cannery. The suddenness of his departure, even though planned, caught his parents by surprise. In the nest one day, gone the next.

Taking wing, metaphorically speaking, isn’t always so abrupt, and even our nephew’s leave-taking is the end result of many years of nurturing and preparation. And he won’t fly away forever: He’ll be back at the end of the summer and over vacations for several years more. But his mother told me, “Once they leave for college, they don’t really live with you anymore. They’re just visiting.”