One late spring day several years ago, I was on the upper flanks of Mount Shasta in Northern California in an intense late-season storm. Ensconced safely in my 4-season tent (a bomber Sierra Designs Lookout that still serves me today), I listened to the wind howl and wondered if our cook tent was going to get flattened.

The next morning, out we went to investigate. The tent—a Mountain Hardwear Kiva—was standing rock solid. Not bad, considering that the tent is a single-wall shelter with only a single pole for support. The Kiva is a shining example of the advantages of a floorless pyramid tent, which features a single extendable pole running from the base to the apex and a series of stake points and guy lines that provide rock-solid stability.

Floorless pyramid tents have some disadvantages. They don’t keep the bugs out. If you pitch one in a depression on a rainy day, water will pool in the middle of it. You have to sleep directly on the ground, which can be wet and/or dirty. But the advantages are equally as many. They are extremely lightweight, can sleep multiple people (the Kiva sleeps four), are great if you’re camping with a dirty/wet dog, and are absolutely fabulous in the winter.

In winter, you can dig out underneath the tent, creating enough room where you can stand up. It’s safer to cook inside the tent, since you’re cooking on the ground instead of easily melted nylon. You can walk in and out of it with your heavy winter boots on. The sloped walls easily shed snow. And they are surprisingly stable even in strong winds.

The Kiva I have is the original model, made of bright orange nylon (I think) and weighing somewhere around 5-5.5 pounds. I’ve used it on Shasta, on a winter Presidential Traverse in New Hampshire, on glacier traverses in Alaska’s Chugach Mountains, and camping in a summer field in the Adirondacks. And it’s performed admirably in all places.

Mountain Hardwear briefly discontinued the Kiva, but has brought it back in the last year or two—you can check it out here. Nowadays it’s made out of a lighter polyester, which lowers the weight (4-4.5 pounds) without sacrificing its tear strength. The footprint of the Kiva is actually pentagonal, which makes it tricky to get all the stakes in at the corners in the right places for tension all the way around, but it’s not too bad.

Another advantage of the Kiva is the snow flaps that ring the base of the tent, which dramatically increases stability once you pile snow on them. (Though this can be a problem if you are dealing with warm days and freezing nights. One of the reasons our Shasta cook tent was so bomber was that the flaps had frozen into position in a layer of near solid ice. It took us a nearly an hour—and a multitude of small tears—to chop the flaps out with our ice axes.) 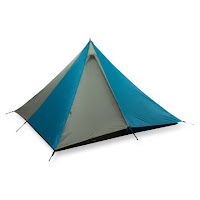 While I heartily endorse the Kiva, I’ve also long drooled over the Black Diamond Megalight. It’s a simpler, lighter-weight pyramid tent (around 2.5 pounds) that packs down to about the size of a Nalgene. It comes with a carbon-fiber center pole, but also includes their Pole Link Converter™ which allows you to use your trekking or ski poles instead. It doesn’t have the snow flaps or guy lines of the Kiva, but its rectangular footprint makes it ultra-simple to set up. Simply lay it out, stake out the four corners, crawl inside, and pop up the center pole. Voila. The Megalight is an updated version of their classic Megamid design and features 30d Silnylon rather than the polyester of the original model.

A few other manufacturers make floorless pyramid tents, including GoLite (check out the Shangri-La 3).