Free Fridays and Other Summer Deals for Families 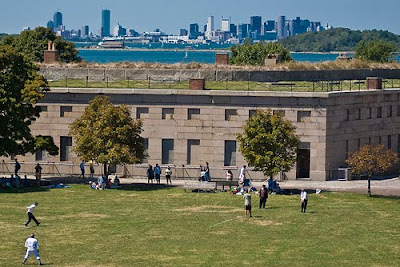 Summer is winding down, but there’s still time to explore free activities in cities around the AMC region, whether they’re near where you live, coincide with places your family is traveling, or give you an idea for one last trip before school starts again.

Massachusetts. In Massachusetts, the Highland Street Foundation has collaborated with cultural organizations around the state to offer nine “Free Fun Fridays” during the summer. Three such Fridays are left. On August 12, free events are being held in Boston’s Arnold Arboretum, Stoneham’s Stone Zoo, and the JFK Library and Museum. That evening, all 14,000 lawn tickets to an evening performance at Tanglewood in Lenox are free, thanks to the foundation.

The final two weekends in August showcase events from Worcester to Watertown and Stockbridge to Springfield. On Friday, August 19, the foundation has arranged for free ferry travel to the two most popular Boston Harbor Islands, Georges Island and Spectacle Island. Tickets are distributed on a first-come first-served basis at Long Wharf-North, near the Aquarium subway station, beginning at 6:30 am. Check the website for specifics on this and other Free Fun Friday events.

New York City. The Bronx Zoo and the New York Botanical Garden are free to the public every Wednesday. The Botanical Garden is also free on Saturday mornings, from 10 a.m. to noon. On the third Friday of each month, from 6 pm to 8:45 pm, the South Street Seaport Museum offers free admission, which includes the chance to board the historic schooner Pioneer. Or take the free Staten Island Ferry for a maritime tour of the city. Several New York City parks and museums are always free: the National Museum of the American Indian; Federal Hall, called the “birthplace of American government,”; Castle Clinton National Monument, with its head-on view of Ellis Island and park ranger talks; Jones Beach State Park, with 7 miles of sandy beaches for swimming and wading; and there’s always Central Park.

Philadelphia. The Philly Fun Guide lists events in the Philadelphia area, many of which are family-friendly and free. Take a guided nature hike at Briar Bush Nature Center or visit a traveling Civil War Road Show and History Fair from August 12-14.

Baltimore. Walk or bike on the 15-mile Gwynns Falls Trail. The trail follows a green space and park system originally planned in 1904 by the Olmsted Brothers, successors to the nation’s first landscape architect firm started by their father, Central Park designer Frederick Law Olmsted. Take a self-guided tour of Baltimore’s many public monuments, which depict such people as Frederick Douglass, Babe Ruth, and Edgar Allen Poe, as well as sea urchins, boy scouts, and “the spirit of music.” Or take a free harbor taxi, the Harbor Connector. Start at the Frederick Douglass – Isaac Myers Maritime Museum in Fell’s Point (admission fees) and travel to the Tide Point Pier.

Washington, D.C. Many residents and tourists know about the extensive free museums and other national attractions in Washington, D.C. Two free activities that feature the outdoors: walk or bike the C & O Canal Towpath, which follows along the shore of the Potomac from Georgetown to Cumberland, M.D.; browse the farmers’ market in Dupont Circle on Sundays from 8:30 a.m. to 1 p.m.

Do you have a favorite free summer activity to share? Add it here!