Fun after dark: 10 activities that even small children will love 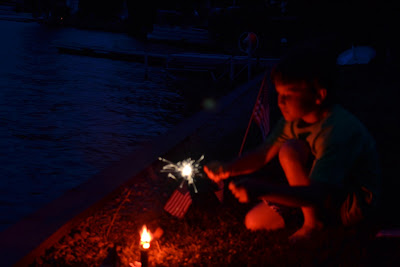 Early childhood is the classic time for being afraid of the dark — and for an interesting reason. Children learn to use their imaginations starting around age two. For several years, their ability to imagine all sorts of things outpaces their ability to distinguish between the real world and the world of make-believe. It’s no wonder that fear so often colors young imaginings at night, which, as Shakespeare said, “cloaks and changes the day.”

Yet that very difference between the known of daylight and night’s unknown opens up a world of new experiences for young children — a world of nighttime sounds and spectacles, of nature perceived differently. Summer is a perfect season for acquainting children with the night and letting their imaginations run wild without straying into darkness.

The following activities allow young children to discover the magic of summer evenings — without being scared of what they find there.

1. Catch fireflies. Watch one light up the space between cupped hands or poke holes in the lid of a glass jar and collect more. Release them in an hour.
2. Listen for owls. It’s been said that while the day has eyes, the night has ears. You’re most likely to hear barred owls — who who, who cooks for you, who cooks for you all? — and barn owls, whose hoot follows a descending scale, in the hour either side of nightfall.
3. Watch a meteor shower. The first two weeks of August bring the year’s best “shooting stars,” the Perseids. Wake up a child between midnight and dawn for the best viewing this year. While you’re waiting for the streak of a meteor across the sky, point out the Big Dipper and Little Dipper.
4. Play flashlight tag. “It” gets the flashlight and counts down from 10 (or, for younger children, calls out the names of everyone playing) while other players scatter. Anyone the flashlight beam lands on is caught.
5. Watch the moon come up. Look through binoculars for “the man in the moon.” Near a lake, river or the ocean, look for the moon’s light trail across the water.
6. Get wet. Zip up life jackets and step into water for a nighttime float. (Parents must accompany children for safety.) Run through sprinklers for a cooling nighttime soak.
7. Build a campfire. Roast marshmallows, tell stories, sing songs. A charcoal grill works equally well as a nighttime hearth.
8. Light up the night. No need to relegate sparklers and glow-sticks to the Fourth of July!
9. Take in an outdoor event at night. Many communities hold evening band concerts, baseball games, and other child-friendly events in lovely green spaces during the summer months. To extend the pleasure, bring a picnic dinner or add a short walk to and from the event.
10. Sleep in a tent. Spending a night in a tent is a big step for young children. Share the night with your child for lasting memories — but be prepared to go inside if your child has had enough excitement for one night.

Children are often afraid of the dark in part because it’s an unknown. Nighttime play can light those dark corners and spark the imagination, all at the same time.

Learn more
— This post was inspired by a request from The Mother Company. Read that article, co-authored with Jennifer Ward, “Facing Fear with Summer Fun After Dark!”