Fun on skis — on the flats, on the slopes, and even in slush 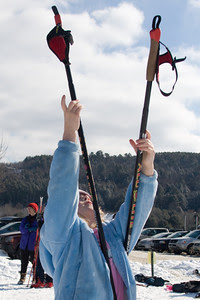 Last winter, for a post here on teaching cross-country skiing, I interviewed a coach in our area Bill Koch League (BKL), an after-school and weekend Nordic program for more than 400 local kids. The program impressed me, and it seemed like fun. Virgil thought so, too, especially after hearing me describe the skills games the kids played. He didn’t know that “gorilla walking” — striding forward in a slight crouch and swinging arms “like a gorilla” — helped kids learn a classic cross-country ski technique or that playing ski-tag helped them become comfortable moving in many directions on skis. He just thought it was something he’d like to do, too.

We were too late for last year’s program, but throughout the winter I’d often see kids wearing the program’s hats or jackets out on the trails. This year we signed Virgil up early for the one-day program on Tuesdays. I volunteered to be a parent coach, too. We splurged on new skis and poles for Virgil, plus a hat with the program logo. Then we waited for the snow to come.

In late January, we’re still waiting for decent snow. I won’t lie: I’ve dreaded many a Tuesday since late November. What can you with a group of a dozen 8- and 9-year olds when there’s no snow? When it’s raining out? When the snow that we did have, briefly, is now mostly natural slushee?

This past Tuesday, after a warm front carrying heavy rain had blown through, I arrived at the practice with Virgil, our gear, and a healthy dose of skepticism. “There’s hardly any snow,” Virgil moaned. “This won’t be any fun.”

I didn’t think it would be any fun either, but I couldn’t tell him that. Instead, I told him to get dressed. I gave myself the same command, and we joined our little group, where a high school skier would be helping me coach that day. 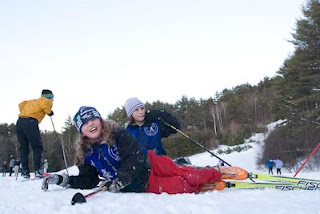 As soon as I was out there, though, surrounded by the other kids, some of them looking as reluctant as Virgil, I stopped noticing the bare patches of ground and started focusing on what we were going to do. The remaining snow, saturated with water, offered easy gliding. Relatively warm temperatures meant that a sideways tumble into a slush puddle was all wet silliness and no risk of hypothermia. When we sent the kids down a short little hill and their skis sent out sprays of slush, we knew enough to send them down into the slush pool again, and again.

“I’m completely soaked!” Virgil crowed happily back in the car, as he pulled off each item of wet clothing and let it fall to the floor with a liquid thumph. “I’m not sure that was skiing,” he said. “But it sure was fun.”

He and I both learned (or re-learned) a classic lesson on Tuesday: You don’t need much to have fun outdoors, even in the winter, even in a sloppy, messy winter. You just have to open the door and get out.

Here are some more ideas and tips for fun on skis, whether they’re Nordic or downhill, in good snow years or bad. 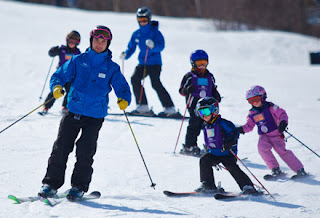 At home
– Let kids wear their boots (Nordic or downhill) and play “space adventurer” even before you leave for the slopes, says Billie Munro Audia, a Safety Ambassador on the ski patrol at Vermont’s Okemo Mountain Resort who has also taught skiing to children in Colorado and elsewhere in New England. Becoming familiar with the equipment is the first step toward becoming comfortable with the sport.
– Celebrate snow, or pray for more, by doing a “snow dance” in your yard. Encourage kids to put on their skis for the celebration.

In the car
– Keep a bag of spare clothing in the car with hat, mittens, socks, extra mid-layers, and underwear (both the long and regular variety). It can come in handy when you arrive at a ski area and realize that you’ve left the mittens behind, or at the end of a day of skiing, when everything your child is wearing is soaked. You can also keep snacks and juice boxes or water in the bag, for quick pick-me-ups.

On the snow
– Children love humor, songs, silly word play. Put that fun to use teaching the basics of skiing. When Audia teaches downhill skiing to children, she encourages them to “walk like a penguin” (ski tips turned out, walk forward by bringing one ski tail forward at a time); make “French fries” (skis pointing forward and parallel, about shoulder width apart); and a make a “slice of pizza” (aim ski tips together and widen the distance between the ski tails). The vivid images stick with kids even better than pizza and French fries at lunch.

On the mountain or trail
– Falling happens. It helps kids to know that falling down is part of learning. “Blaming snow snakes for falls works wonders,” says Audia. “You know snow snakes, right? Those hard-to-see white snakes that pop up from the snow, grab your ski pants, and make you fall?” Keep the light touch by making a game out of getting up.
– Play games. Children learn by playing. To help kids practice transferring their weight on downhill turns, Audia plays Follow the Leader. We ended our practice on Tuesday by playing Capture the Flag. Ski poles stuck into the soggy ground served as our flags. Virgil and the others moved tentatively at first, but quickly forgot that they were on skis. I watched Virgil glide past the sentries (he was imagining himself a Viking warrior, he told me later), capture the other team’s pole and make a dash for safety. It was the most confidently he had skied all day. And he was smiling.