These two new items of bicycle safety gear light up your dome with programmable LEDs and show what’s behind you with a handlebar-mounted rearview camera display. Both offer high-tech solutions to make your next ride a safer one. 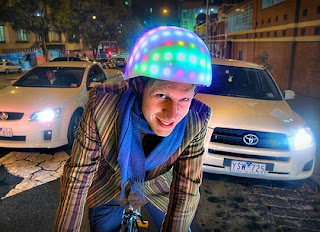 LumaHelm
Take a standard bicycle helmet, then cover it evenly with strips of multi-colored LED lights. You’ve now got an ultrabright beacon on your head to alert drivers. But that’s just the beginning. Next integrate an accelerometer and interactive computer software. The result is a helmet that can light up in specific ways to pre-programmed actions. For example, it could indicate a flashing red left-turn signal when you nod your head to the left. (Or light up according to guitar riffs, as this YouTube video shows.)

The LunaHelm is a prototype helmet developed by the Exertion Games Lab, part of RMIT University in Melbourne, Australia. It hasn’t yet been developed as a commercial product, but I would watch for it (or some equivalent) in the next year or two.

Cervellum Hindsight 45
Lots of new cars feature a rearview camera that allows you to see what’s behind you before you back over it. Now you can get the same technology on a bicycle with the Cervellum Hindsight 45. The system consists of a handlebar-mounted 3.5-inch LCD screen, which is connected to a tiny digital camera on your seatpost via a micro-HDMI cable.

The unit not only shows you what’s behind you, it also records a continuous five-minute loop that automatically stops once the bike is laid down (thus recording the specifics of any accident, should it occur). Unlike the LumaHelm, the Cervellum Hindsight 45 ($299) is now available for purchase.

Ride on! Ride safe! Into the future!

For more on staying safe on two wheels, check out these recent posts:

Learn more about cycling gear and accessories in these recent posts:
Now You See Me: Bike Lights, Reflectors, and High Visibility (2011)
Bicycles for Children of all Ages (2012)
High-Visibility Backpack Covers for Cycling (2012)
Spare Your Pieces: Noseless Bike Saddles (2011)
Get on the Bike: Which style is right for you? (2011)
An Airbag for Cyclists (2010)
Bicycle Helmets: More Reasons to Wear One (2010)