If you’re like me, you’ve somehow managed to accumulate an inexplicable number of AAA batteries in your gear chest, almost all of them for headlamp use. Some are fresh. Some are dead and awaiting proper disposal—and infused with the nagging guilt that you really should get your act together and find a rechargeable, reusable solution that’s less toxic to the environment.

Now Petzl has introduced a nifty solution for owners of its Tikka² and Zipka² line of headlamps. Known as the Core, it’s a rechargeable lithium-ion battery that snaps into the battery compartment of the headlamp. It’s lightweight (1.1 ounces, essentially the same weight as three AAA batteries). It comes with a short USB charging cable, allowing you to charge it from your computer or any other USB-compatible power source like a backcountry solar panel. (A variety of other adaptors—car, wall socket, etc—are available but sold separately.) According to company specs, it can be recharged up to 300 times (it takes 3 hours to fully charge). A battery life indicator keeps tabs on how much juice is left. 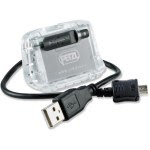 So far, so good, but nothing too radically innovative. Here’s the part that I find more intriguing as a potential harbinger of future power trends: The battery can actually be programmed to regulate its output according to your specific needs. Think of it as a “smart battery.”

After downloading the OS by Petzl software (free for both PC and Mac), you connect the Core to your computer and then adjust the output for your intended use. For example, you can set it to maximum output (and brightness) if you’re using it for only a short period between charges (an evening run, say) or lower levels for longer battery life on a longer excursion. You can have it taper down its brightness gradually as battery life diminishes, or abruptly drop off once it’s about done (thus maximizing your high-brightness period). I wouldn’t be surprised to see this sort of functionality becoming more commonplace in other devices in the years ahead.