Giardia in Backcountry Water Sources: How Real is the Risk?

The outdoor industry has done a good job stressing the importance of water treatment in the backcountry, primarily to eliminate giardia—a nasty intestinal parasite—from your drinking sources. But the evidence is mixed, at best, as to how real the risk actually is.

The most comprehensive study I was able to locate comes from the International Journal of Infectious Diseases: Risk of Giardiasis from Consumption of Wilderness Water in North America: A systematic review of epidemiologic data. Published in 2000, the study reviewed all available scientific literature and medical studies related to giardia in the backcountry, a total of 104 articles. Of these, nine met the study’s inclusion criteria. 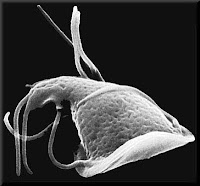 Having giardia, or giardiasis as the condition is medically known, is an unpleasant experience. Even the study’s scientific description of it sounds grim: “Giardiasis is an enteric infection with the binucleate trophozite phase of the flagellate protozoan parasite Giardia lamblia.” It’s acquired when you drink water containing giardia cysts, which then blossom in your gut into the “binucleate trophozite phase” pictured here. This leads to diarrhea, excessive flatulence, foul-smelling excrement, nausea, fatigue, and abdominal cramps. Yuck. (For everything on giardia, here’s a comprehensive giardia round-up from Stanford University.)

Giardia is obviously worth preventing. The million-dollar question, though, is what is the risk of acquiring giardia from backcountry water sources? And the study in question has these conclusions:

>> Based on published reports, there is a statistically higher rate of giardiasis among outdoor recreationists compared to the general population.
>> It is unclear whether this is a result of drinking contaminated water or poor hygiene, which can result in food contamination during meal preparation.
>> Virtually no water sample studies have been done in the backcountry to measure the presence, or lack thereof, of giardia. Therefore it is impossible to determine with any certainty the actual level of risk.

So what’s the upshot? My take on it is this: I think that there is an extremely low risk of acquiring giardia from drinking untreated water in the backcountry, BUT the consequences of getting giardia—however low the risk—are worth preventing. So I treat my drinking water.

I’m also convinced that a significant number of gastrointestinal issues in the backcountry do come from poor hygiene, especially in large groups. If the outdoor industry stressed good hygiene as much as water treatment, I suspect that the incidence of giardia and other stomach nasties would go down. I encourage all hikers and backpackers to add Purel or another disinfecting hand cleanser to their packs—and use it regularly, especially after defecating.