Gore-Tex Paclite is a waterproof-breathable material designed to be a lighter weight alternative to its standard Gore-Tex cousin, a feat made possible by an oleophobic, or oil-hating, coating on its underside that keeps your pore-clogging body oils to yourself.

Gore-Tex is a laminate, a solid piece of material that is glued (laminated) to nylon and other fabrics. A traditional Gore-Tex jacket has nylon layers laminated on both sides, creating a three-layer, or three-ply, piece of material with the Gore-Tex sandwiched in the middle. The inner nylon layer is designed primarily to protect the Gore-Tex from you. The natural oils we produce from sweat and activity would otherwise clog up the microscopic pores that allow water vapor (aka your sweat) to escape from the inside.

Gore-Tex Paclite, on the other hand, features an oil-repellent layer on the inside face, which eliminates the need for a layer of fabric. Weight and bulk are consequently reduced. Many Paclite shells weigh in at less than a pound, yet still provide the durability of a laminate (as opposed to the lesser durability of a waterproof-breathable coating). 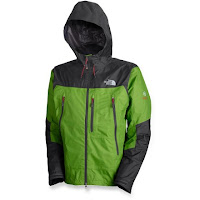 Many major gear manufacturers feature a Paclite option in their 2010 line, including the Typhoon Jacket from Mountain Hardwear (15 ounces, $200), the Alpha SL Jacket from Arcteryx (12 ounces, $299), and the Meru Jacket from The North Face (14 ounces, $229). Men’s and women’s versions available.