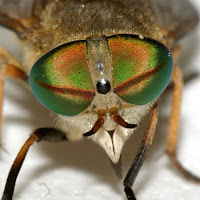 Greenheads are a type of large biting fly that live in saltwater marshes from early July until early August. When they’re out in force, they can be a blood-sucking bane for beachgoers from North Carolina to Maine. Here’s what you can do to keep them at bay.

Greenheads are big, roughly an inch long, and named for their large, distinctively colored eyes. Like mosquitoes, the females need blood to nurture their eggs. But unlike mosquitoes, which sip blood through a tiny proboscis, greenheads obtain their meal by ripping open victims’ flesh with razor-sharp, scimitar-like mouthparts. They then lap up the blood as it pools. And yes, having your skin torn open really hurts; welts often result as well.

Unfortunately, insect repellents have little effect on deterring greenhead advances, regardless of whether it’s DEET, picaridin, or other common repellents. No matter what you slather on, they will still land on you. (There is some evidence, however, that repellents do reduce the chances that they’ll actually bite once they’ve landed.)

So what to do? Here are your options: