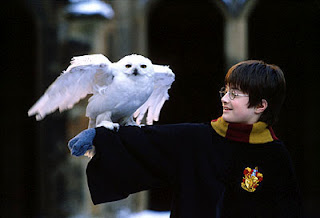 Over the weekend, we took our two wizards-in-training to see the newest Harry Potter film, which as you probably know covers the first half of the series’ final book.

What does this have to do with kids and the outdoors, you might ask. Good question, given that we call the summer before Ursula started fourth grade the “Harry Potter summer.” She opened the first book in early July and finished the sixth book in August, just in time to pick up the newly published seventh book. All told, she read 4,000 pages in six weeks. When I think back to those six weeks, I see Ursula draped sideways over a chair with a Harry Potter book in front of her face, the only movement one leg bouncing slowly against the armrest — hardly an advertisement for an active, outdoors childhood.

And yet the adventures of Harry, Hermione, and Ron and their Hogwarts friends have given Ursula and Virgil and their friends a common language for outdoor play. In our children’s attempts to create proper wizard wands, they learned how to identify different types of trees. (Though I also gently broke the news that dragon heartstrings were in short supply around here….) When they collected “magic” herbs and stones, tied them into bundles, and headed into the woods or down to the pond on quests, I’m sure the books’ plots provided starting points — and just as sure that our small wizards’ stories took off in new directions.

A few weeks ago, Jim and I surprised a snowy owl from its perch in a snag along our road. The big white owls spend summers on the Arctic tundra; some fly south to the Northeast for the winter (giving new meaning to the phrase “snowbirds”). In fact, one of the favored winter stopovers for snowy owls is Boston’s Logan Airport: Researchers speculate that the flat, snow-covered terrain resembles their Arctic habitat. When we told Ursula and Virgil that we’d watched the bird fly down through our neighbor’s field and into the state forest, they responded with one word: Hedwig!

Hedwig is Harry Potter’s magic animal companion. Apparently, J. K. Rowling picked a snowy owl as Harry’s “familiar,” even though the birds don’t appear in Great Britain, because she considers them the most beautiful of the owls.

We were sorry that Ursula and Virgil didn’t see our snowy owl visitor, so we were delighted when we entered the movie theater on Friday night and saw staff members from VINS Nature Center holding a real snowy owl. Ursula and Virgil ran to join the children (and adults) standing in line to see the bird up close.

I spoke with one of the VINS staffers, who said that movie theaters near their Quechee, Vermont, center had welcomed the center’s efforts to meld the magic on screen with the real-life magic of the majestic birds. Afterward, in her review of the movie — plot spoiler alert! — Ursula pointed out that Hedwig died differently in the movie than in the book.

“Yeah,” said Virgil. “But at least we got to see a real-life Hedwig.”

Learn more
… about VINS, Vermont Institute of Natural Sciences.
… about snowy owls (and why they love airports) from MassAudubon and from National Geographic.
… about the owls of Harry Potter.