Henry Hikes to Fitchburg (and other Thoreau books for kids) 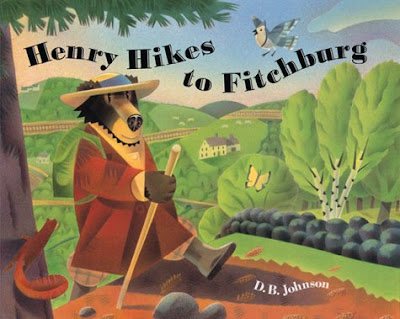 Even after last weekend’s time change, it’s still dark on school-day mornings when I wake up Ursula and Virgil. This morning as I leaned over to give Ursula a first shake, I stumbled over a pile of books next to her bed. The pile avalanched onto my bare feet and nearly toppled me. Threats were made and promises extracted, along general lines that the entire mountain of books be put back where they belonged, or they would be carted away.

Later, after the kids were gone, I returned to Ursula’s room for a better look at the pile. Teetering on the very top was my Riverside Shakespeare — no doubt the very tome my toes had met with such unexpected force — and several other copies of plays by the Bard. Ursula’s eighth-grade class has been studying Shakespeare this fall, so the books didn’t surprise me, now that I saw them in daylight.

But the broad base they were resting on did surprise me — many children’s books, most of them picture books: Greek myths, fairies, African folktales, silly stories, all mixed together. And at the bottom, all five of our “Henry” books: Henry, as in Henry David Thoreau, the author of Walden, civilly disobedient protester, adventurer, and naturalist.

D.B. Johnson wrote and illustrated five picture books based on events in Thoreau’s life. The first, Henry Hikes to Fitchburg, was based on an event that Thoreau wrote about in Walden:

“One says to me, ‘I wonder that you do not lay up money; you love to travel; you might take the cars [the train] and go to Fitchburg today and see the country.’ But I am wiser than that. I have learned that the swiftest traveler is he that goes afoot. I say to my friend, Suppose we try who will get there first.”

Thoreau’s sly trick, in the book as in real life, was to insist that his friend earn his 90-cent fare for the 30-mile train ride while Thoreau, depicted in all the books as a black bear, covers the distance on foot. We see the passage of the day on the watch carried by Thoreau’s friend, as he fills the woodbox in Mrs. Alcott’s kitchen (10 cents), sweeps out the post office (5 cents), and other jobs to earn his way to Fitchburg. On facing pages, we see Henry: While his friend is pulling weeds, he’s picking ferns and flowers; he climbs a tree while his friend moves bookcases.

By the time Henry’s friend has earned enough money to buy his ticket, Henry is 7 miles from Fitchburg. While his friend sits on the crowded train, Henry eats his way through a blackberry patch. When Henry arrives in Fitchburg, night has fallen and his friend is waiting for him. “The train was faster,” his friend says. Henry hands his friend a pail filled with fresh berries. “I know,” he tells him. “I stopped for blackberries.”

Henry Builds a Cabin describes the cabin that Thoreau built by Walden Pond and lived in for two years. The night that Thoreau spent in jail after refusing to pay his taxes to a government that supported slavery provides the frame for Henry Climbs a Mountain. Henry Works celebrates Thoreau’s contributions as a naturalist, and Henry’s Night draws on a moonlit walk Thoreau described in Walden.

At the end of Walden, Thoreau wrote, “If a man loses pace with his companions, perhaps it is because he hears a different drummer. Let him step to the music which he hears, however measured, or far away.” If Ursula steps to music from Shakespeare and Thoreau, I won’t complain. She just has to make enough space on her floor for me to step inside her room without injury.

Learn more
– about Henry Hikes to Fitchburg and other books by D.B. Johnson.